They hadn't seen each other in a coon's age 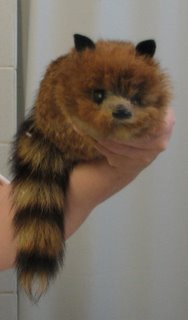 This is Rocky Raccoon. There should be a trademark symbol next to his name, but I don't know where to find one.

Rocky lives on a shelf in my closet. He's a puppet. His rabbit-disguised-as-raccoon fur is wrapped around a loosely coiled spring, and by manipulating the spring with your finger, you can make him appear to do all sorts of things. For some reason, most people don't seem to notice right away that Rocky has no legs.

I bought Rocky at a magic show in the mid-80s, when I was in a long-term relationship with a man whose hobby was magic and illusions. (He was good at it, too; he made himself disappear sometime in 1989 and I haven't seen him since.) Rocky has never personally been in show business, but he's entertained a few grandchildren in his time--and me. He's entertained me a lot.

It must have been four or five years ago that I was cleaning out some things and stumbled across Rocky, and my first thought was to introduce him to Butch and Kadi. They were super-excited to meet him. Kadi politely sniffed under his tail (she still does that--every single time), and Butch, who was normally a little standoffish with other animals, wagged his own tail blissfully as Rocky rubbed against his face. Neither of the dogs has ever tried to bite Rocky or to play with him like a toy.

Rocky only comes out to visit once every three or four months. When he does, he talks to my dogs in a voice that sounds a lot like mine, except that his is high-pitched and squeaky, and he talks really fast. He mostly says things like, "Hey, Butch and Kadi, how you doin', little buddies?" and "Ooooooh, I'm soooo happy to seeeee youuuuu; let me scratch your ears." Kadi's sniffed under Rocky's tail enough times to know there's no life force there, so she usually just takes a quick whiff to make sure nothing's changed, then exits. But Butch sticks around until I tell Rocky, in my own voice, that it's time to go home.

Now that Rocky's older, he mostly just enjoys his quiet time, resting in between my steam iron and my old straw hat with the brightly colored floral band. But that doesn't mean he's been forgotten. This morning I walked into my bedroom and found Butch standing at the closed closet doors, wagging his tail, waiting patiently. I knew instantly what he wanted. "Do you need to see Rocky?" I asked him, and his tail wagged faster and faster. I took Rocky down and let them visit for a few minutes, then Butch went back into the den, and I left for work.

Sometimes, I guess, you just think about an old friend for no particular reason at all.
Posted by Linda@VS at 4:19 PM