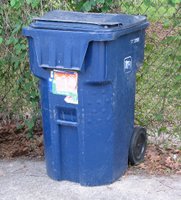 On Tuesday mornings at the crack of dawn, the garbage truck rolls through my neighborhood, which means that sometime on Monday night I'll be outside taking my gigantic garbage can to the curb.

The driveway is paved and the can is on wheels, so as long as I hold on with both hands, it's fairly easy to manage--at least on the flat part of the driveway. But let me mention now that my house sits on top of a little hill. And let me add that I'm no spring chicken and that I'm overweight and out of shape. Are you getting a picture in your head? Good, then, let's go on.

Even though it was nine years ago, I remember the first time I took out the garbage after moving into this house. The can was shiny and new and so big--almost up to my armpits. Because of the recent unpacking, it was stuffed to the max, and even as big as it was, I still had one bag of trash that wouldn't fit. The loaded garbage can was heavier than I expected, too, and I remember being surprised, since it had wheels, that it took so much muscle to move.

I had the extra trash bag in one hand and was trying to push the can with the other, but it was extremely difficult to steer. After trying to push it for a few feet, I got the bright idea that it might be easier if I'd just pull it instead. I tilted it over and found I could balance the weight of it in one hand, so I picked up the extra trash bag again and fully expected to get all the garbage to the road in one trip. That approach worked just fine until I got to the hill.

I started down the slope and the garbage can began to speed up behind me. I picked up my pace a little bit to keep it from running over my heels, and it started moving faster and faster and faster, as if Mario Andretti were inside the damned thing and driving it in his last lap before the checkered flag. I went from a fast walk to a trot to a full-out, booby-bouncing, hair-blowing-in-the-wind, knees-high, escape-from-danger run, all the way down the driveway and almost into the road, finally saving myself by veering off the pavement and onto the grass.

So these days, if you're in my neighborhood on a Monday night, you might see me taking the garbage out. I'll be walking squarely behind the can, holding it tightly with both hands, taking small, slow steps in my rubber-soled shoes, and using every ounce of strength in my body to hold back the demon-racer that lives inside that can and dreams of running free.
Posted by Linda@VS at 6:04 PM