Back in November I wrote about Levi's attention to bells and timers. At one-thirty the other night he stood by my bed and poked me awake with his nose. I scratched his head and told him to go back to bed. Instead, he stood up on his hind legs, placed one paw on the mattress for balance and used the other one to slap me repeatedly on the shoulder. When he was satisfied that I was wide awake, he walked to the bedroom door and looked over his shoulder, waiting for me to follow him. I did -- all the way into the kitchen, where he stopped and looked up toward the spot where my cell phone lay on the counter. At precisely that moment, the phone lit up and the text tone sounded. It was a wrong number, but Levi didn't know that. I like to think he'd alert me to an urgent call, too.

The arrangement of chairs on our patio looks odd but has a purpose. Two of the chairs sit facing each other with about a foot of knee room between them. The chair that looks out onto the yard is for sitting; the other chair is for propping feet on and is also used as a tennis-ball return spot. After we get tired of throwing the ball for the dogs, they get a little more mileage out of us by placing the ball on the seat of the chair, where a human foot hardly has to move at all to knock the ball off the to one side or another. Kim noticed recently that Levi and Gimpy understand spatial relationships well enough that they wait on the left side of the chair if her foot is positioned to the right of the ball. If she moves her leg to the left side of the ball, both dogs scurry around to the right side of the chair.

They do something similar when we play coffee-table ball in the house. Once they've placed the ball under the low-slung table, they watch while I stick the broom handle under there, then they quickly map out some kind of mental trajectory and race each other to the exact place where the ball will roll out as soon as I give it a good whack.

Levi is the only dog I've ever had that understands to look in the direction a finger points instead of focusing on the pointed finger. This skill comes in handy. He rarely goes outside without a ball in his mouth, and he knows it's his job to bring the ball back in the house when playtime is over. Usually he does it. Sometimes, if he hurries back inside, I have to send him out a second time to get his ball. That's an easy task for him--unless he can't remember where he left it. Being considerably taller than Levi is, I can often spot the yellow-green ball that he can't see behind leaves or grass at a distant spot. That's where the pointing comes in: I point, and he finds it after a short search. Now, if I can only get him to understand what I mean by "warmer" and "colder"...

Such shaggy dogs! Haircuts are coming soon, just in time for warmer weather. 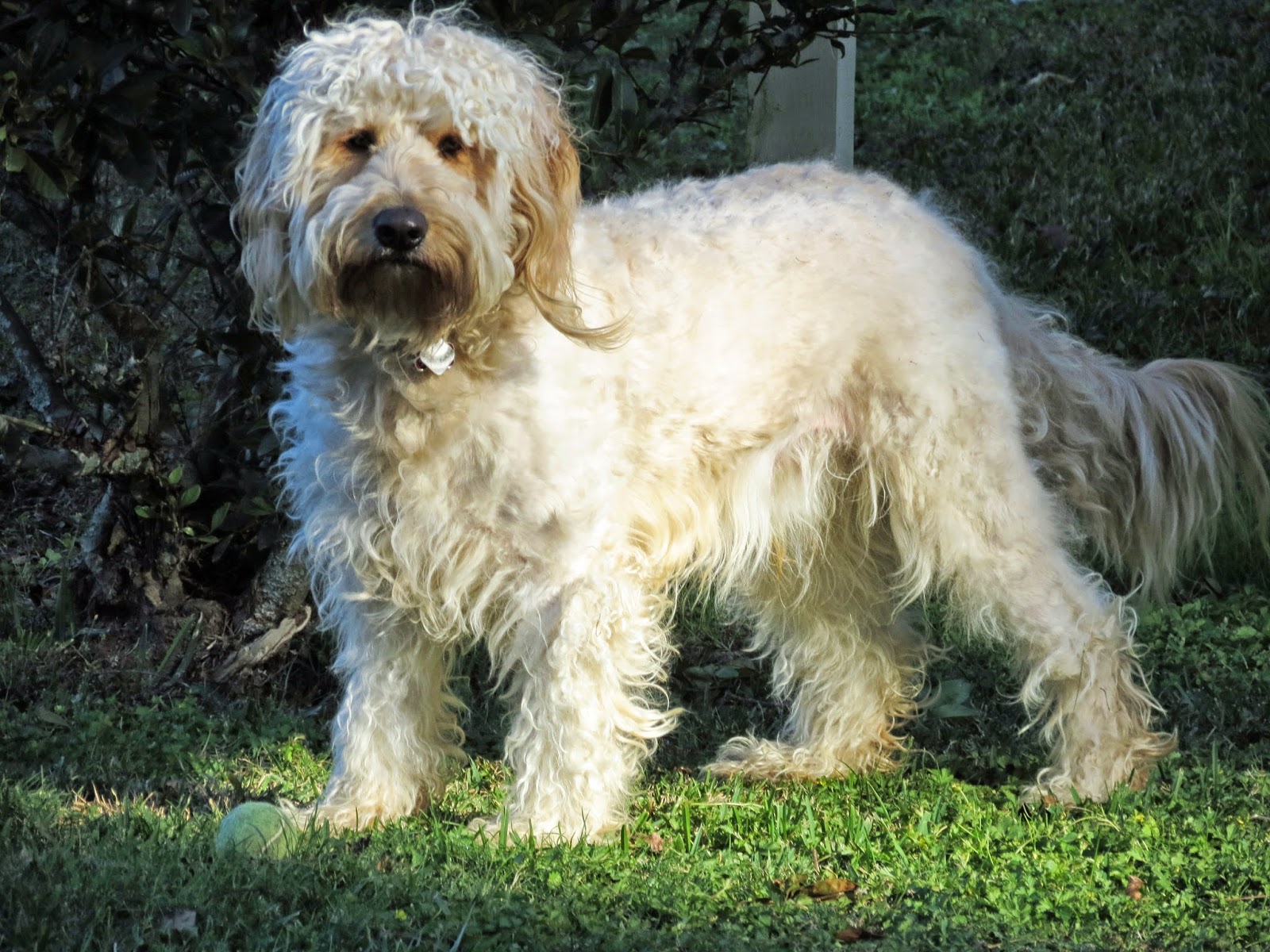 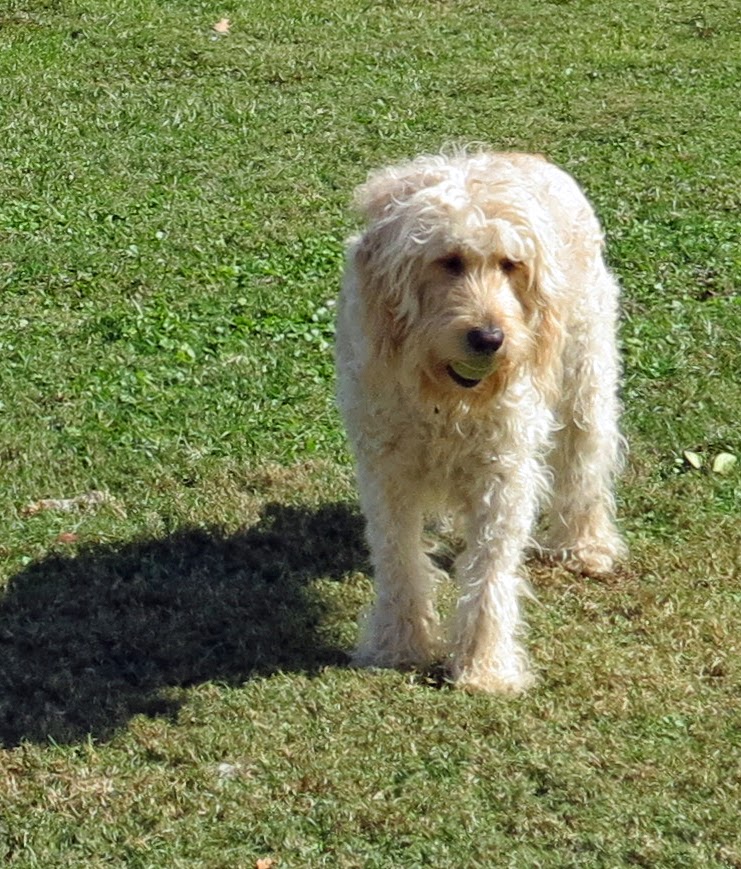 "...And always remember, the dark clouds pass with time"

On days when I walked the six blocks home from Phelps Elementary School alone, I sometimes sang out loud to pass the time. My favorite songs were hits from the radio, and in fourth grade (1951), one ballad dominated my repertoire:


When I think of this song, what I hear in my head is Johnny Ray's voice, but what I see in the visual part of my mind is a tree-lined sidewalk on which a skinny, blond-haired, nine-year-old girl swings a plaid, plastic book bag, paces each saddle-oxford-clad footstep to the beat of her inner music, and belts out the lyrics as unselfconsciously as if no one could possibly hear her from behind fluttering curtains and open windows.

It may be a sad song, but those memories are happy, happy ones.

The song is "The Little White Cloud That Cried," performed by Johnny Ray and The Four Lads.
Click here to read the lyrics.
Thanks to MrSherco12 for posting the video on YouTube.
Posted by Linda@VS at 2:17 PM No comments:

One Step at a Time

On Tuesday, while many Louisianans were collecting beads at Mardi Gras festivities, I was at the doctor's office, collecting information, advice, and medication samples. A day earlier my younger daughter had gently and lovingly asked me what was going on and why I seemed to have "shut down" lately. Her sister had asked similar questions two days earlier.

The thing is, it had crept up so stealthily that I hadn't noticed it. I was well aware of an overwhelming physical fatigue but hadn't paid much attention to my emotional state until my daughters pointed it out. It was/is depression.

I should have recognized it. It runs through the DNA on my father's side of the family, so I've seen it before. I've experienced it before, too, but up to now, for me, depression has always been a response to one unfortunate situation or another. This time there was no obvious reason for it.

Then came the message from the doctor: the blood test I'd taken a couple of weeks earlier indicated that my thyroid gland isn't producing at the level it should be. To me this was good news: fatigue and depression are symptoms of hypothyroidism, so maybe that's my excuse for long naps and skipped showers. We'll see. It reportedly takes a few weeks for the thyroid meds to kick in.

As it happens, I'm already feeling somewhat perkier mentally. The credit for that may go to giving up diet soda, which I did about a week ago. Because I enjoy it so much, I've always been skeptical about the many articles linking diet soda to depression, but this is the second time in four years that I've broken a 4-5 cans per day habit with fast, positive results. Some of us apparently don't learn a lesson the first time.

Anyway, between the mood lift and the encouragement of a few faithful readers, I've decided to keep plugging away at this blog for now. With a little luck and some thyroid hormone replacement therapy, Velvet Sacks and I may have a fighting chance.
Posted by Linda@VS at 1:22 PM 6 comments:

For years I had a recurrent dream in which I walked out my backdoor onto a short sidewalk that ended up at the door of a large, greenhouse-looking building that I had forgotten was there. It turned out to be an aviary for tropical birds. The enclosure was filled with cages containing birds like the beauties pictured in this post (photographed at the Greater Baton Rouge Zoo), plus dozens of small, colorful parakeets. 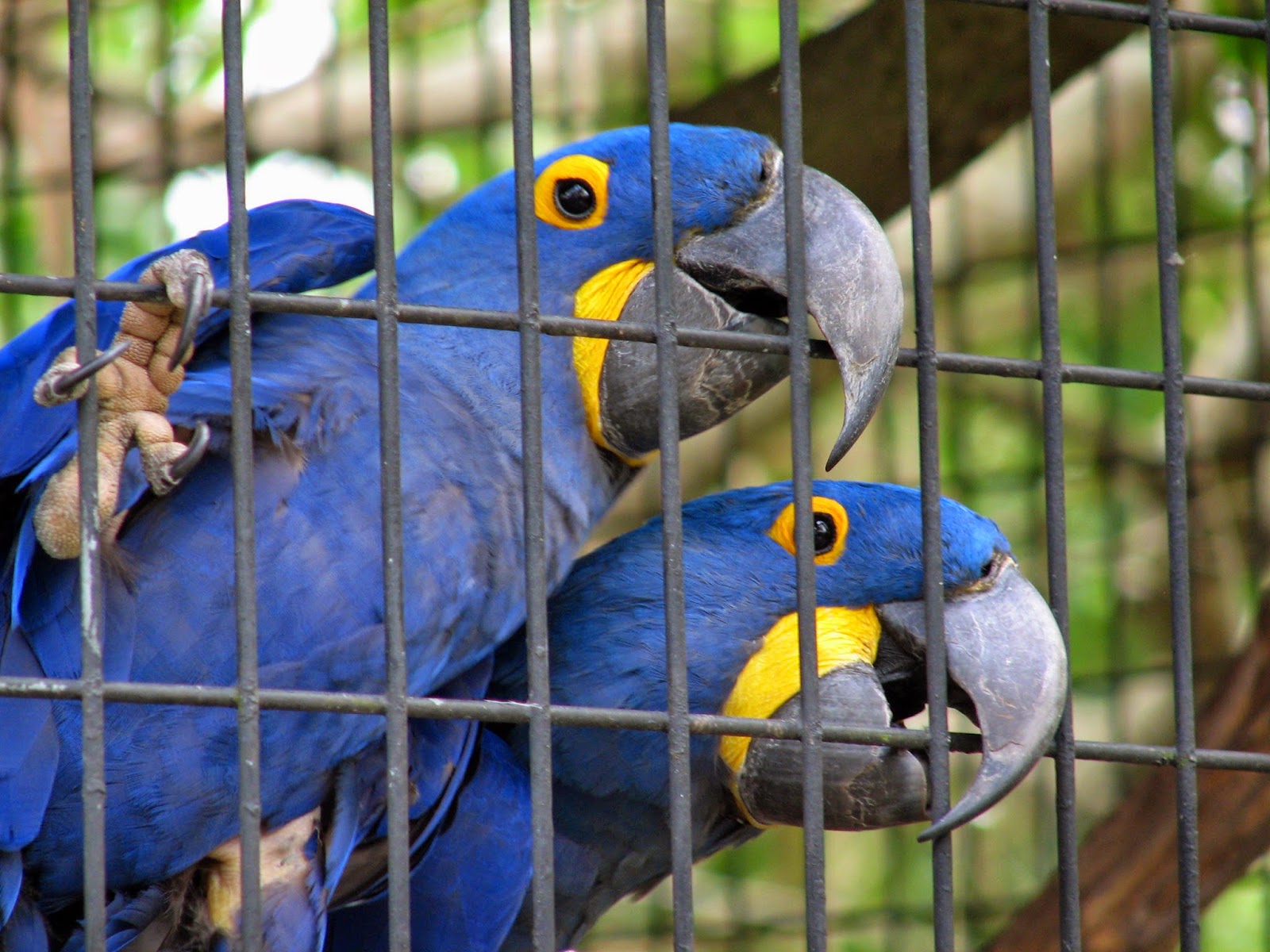 The difference between the birds in the pictures and the birds in my dream is that the dream birds were dying. A few of them were already dead. All the food and water dishes were empty, the cages covered in droppings, and those birds that were still alive, lying on their sides and gasping for breath, had ragged feathers and bald patches. 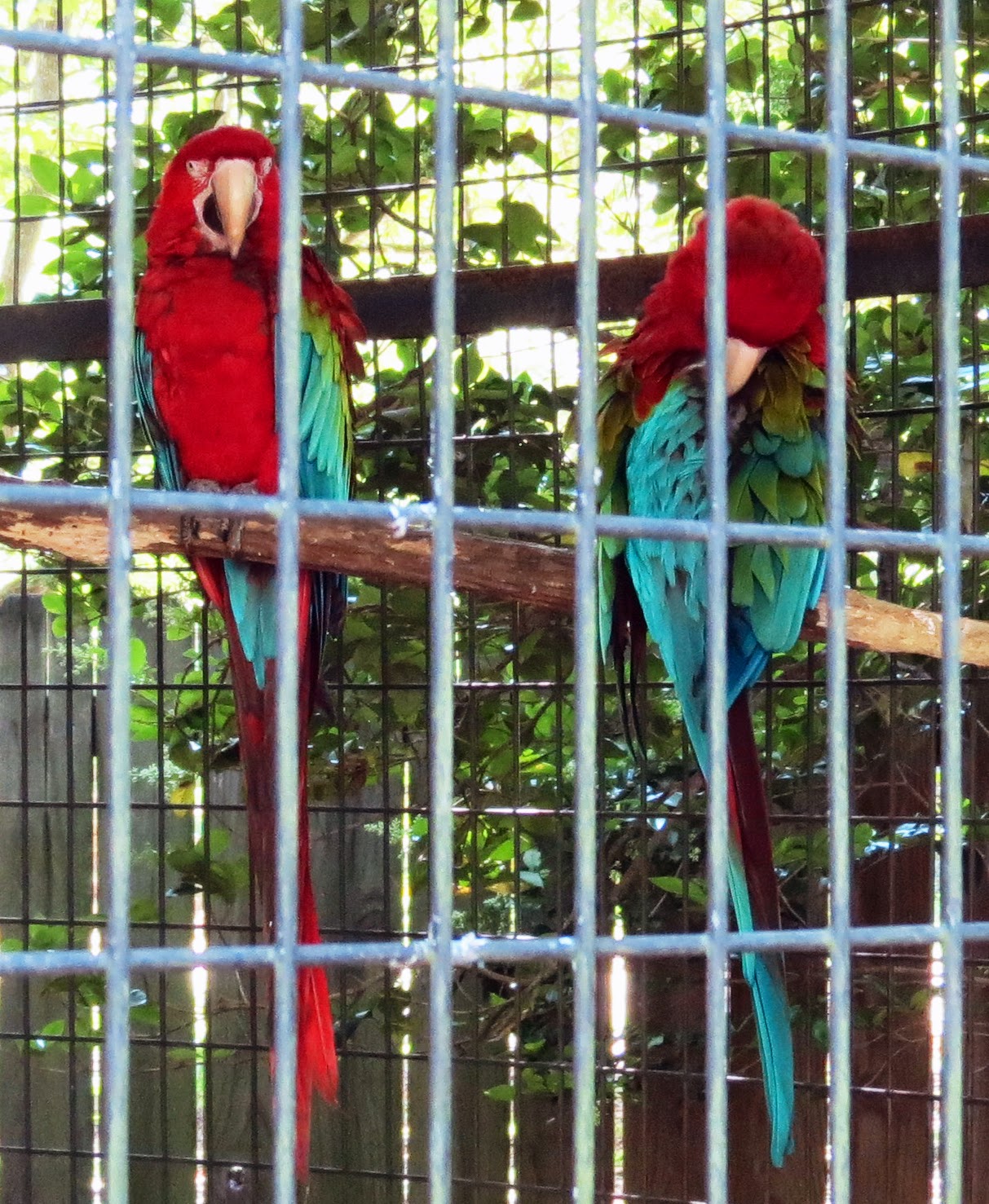 I was horrified in the dream to find the birds in such dreadful condition and horrified even more to know that I was the one who had allowed it to happen. I loved the birds, but, feeling overwhelmed by life in general, I'd allowed one day after another to pass without tending to them. Now I was looking at the consequences of my neglect. 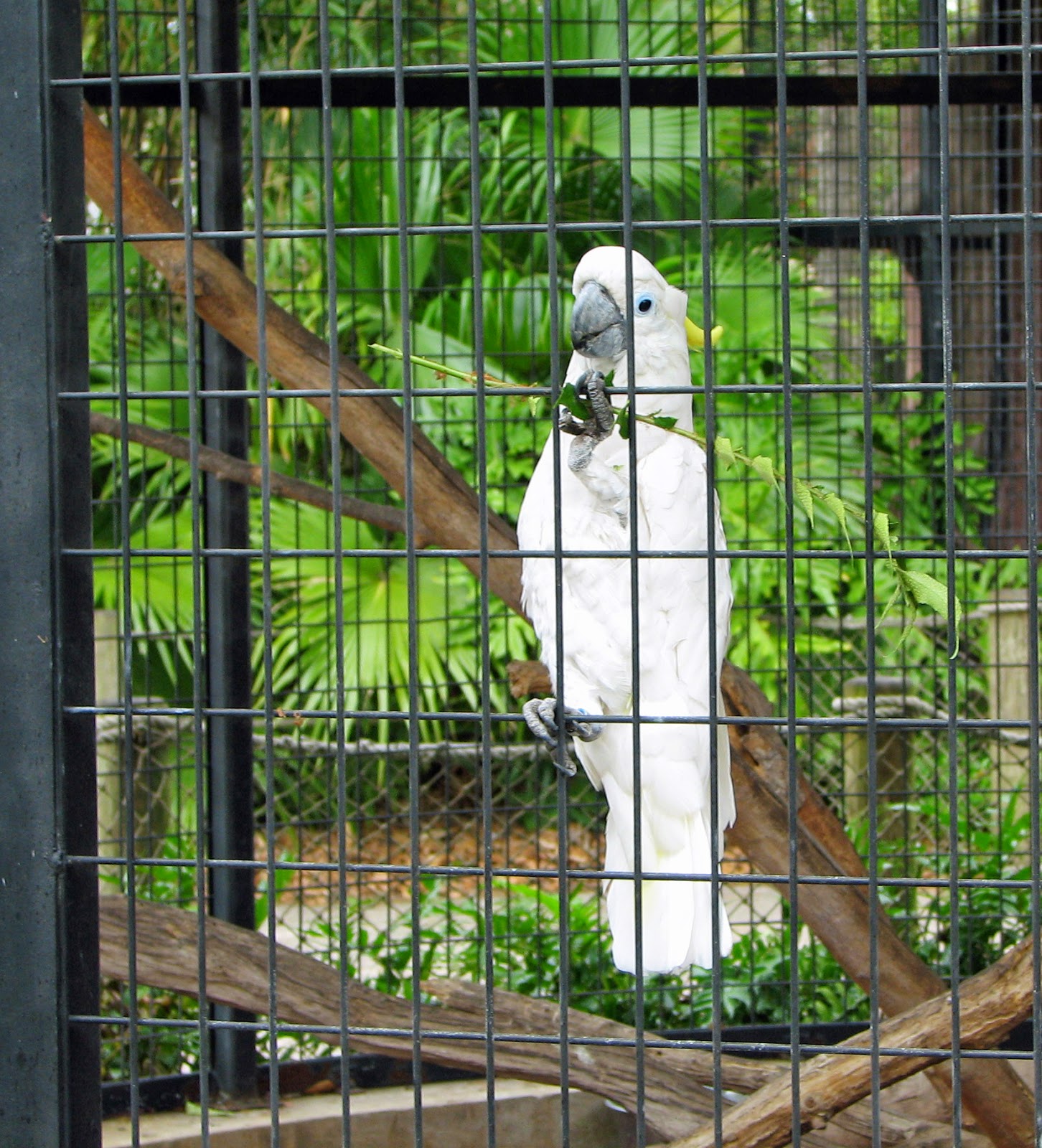 Every time I had that dream, the guilt I felt lingered long into the day ahead. It's been years since the dream has recurred, but I remember the lesson of it well. 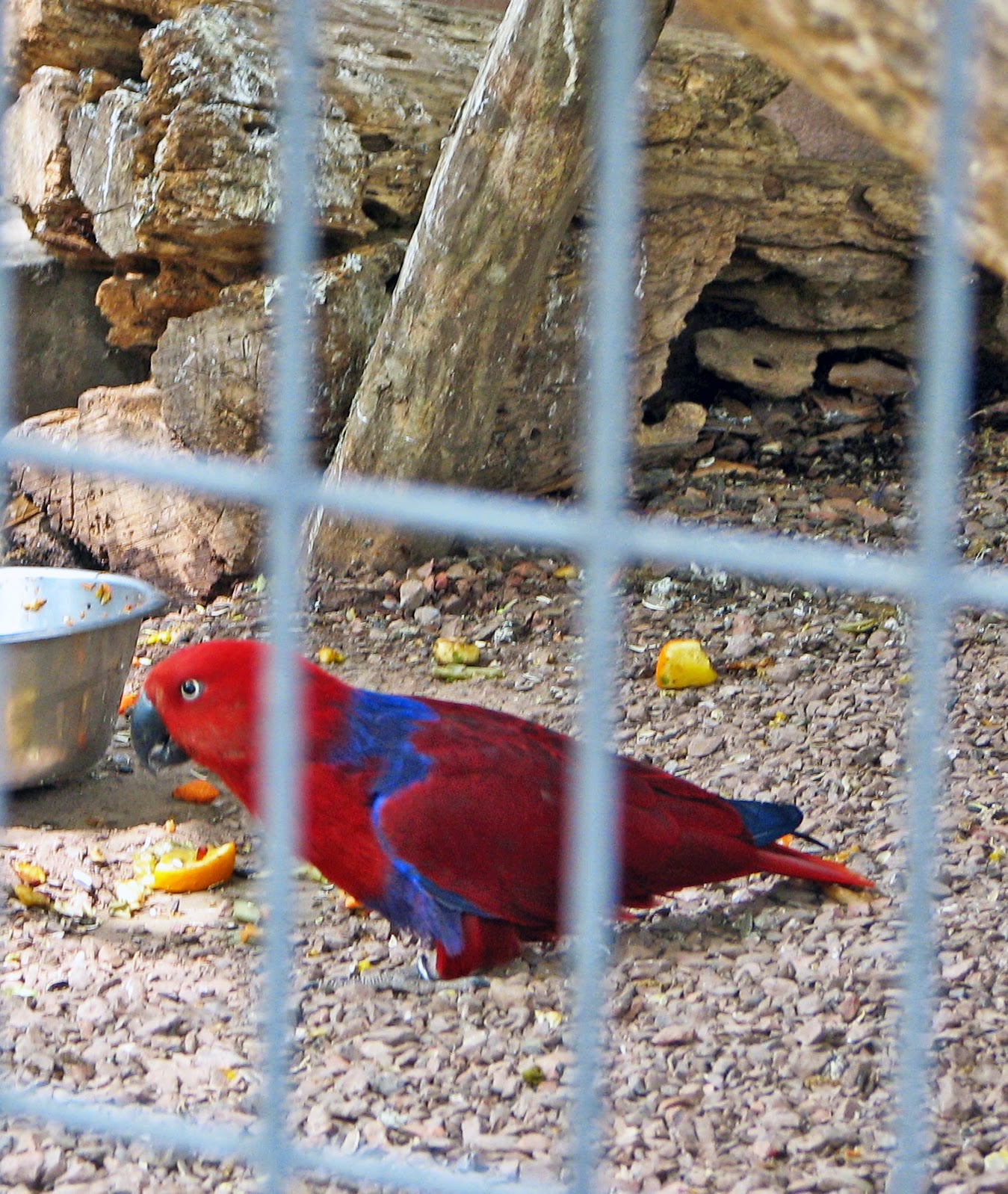 I thought about it the other day when I was considering this blog. I've been neglecting it, I know, and I'm pretty sure it's dying. I'm not feeding it on a regular basis. The number of readers has dwindled down to a small fraction of what it used to be. My fault. 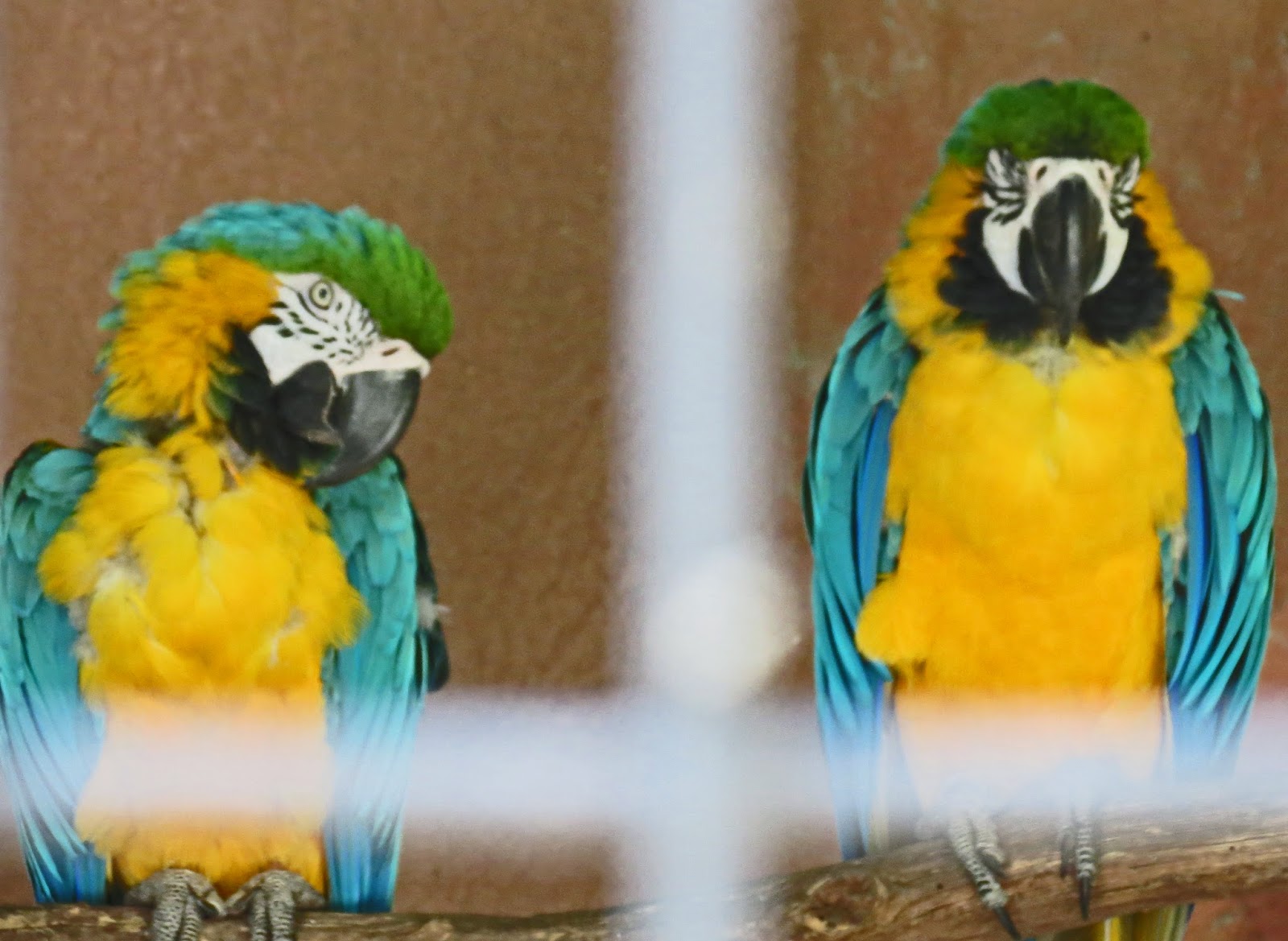 I have loved the blogging experience and the people I've met along the way, but when days or weeks pass without new posts, I feel as guilty as I did in the dream about the birds, and I do not like that feeling. 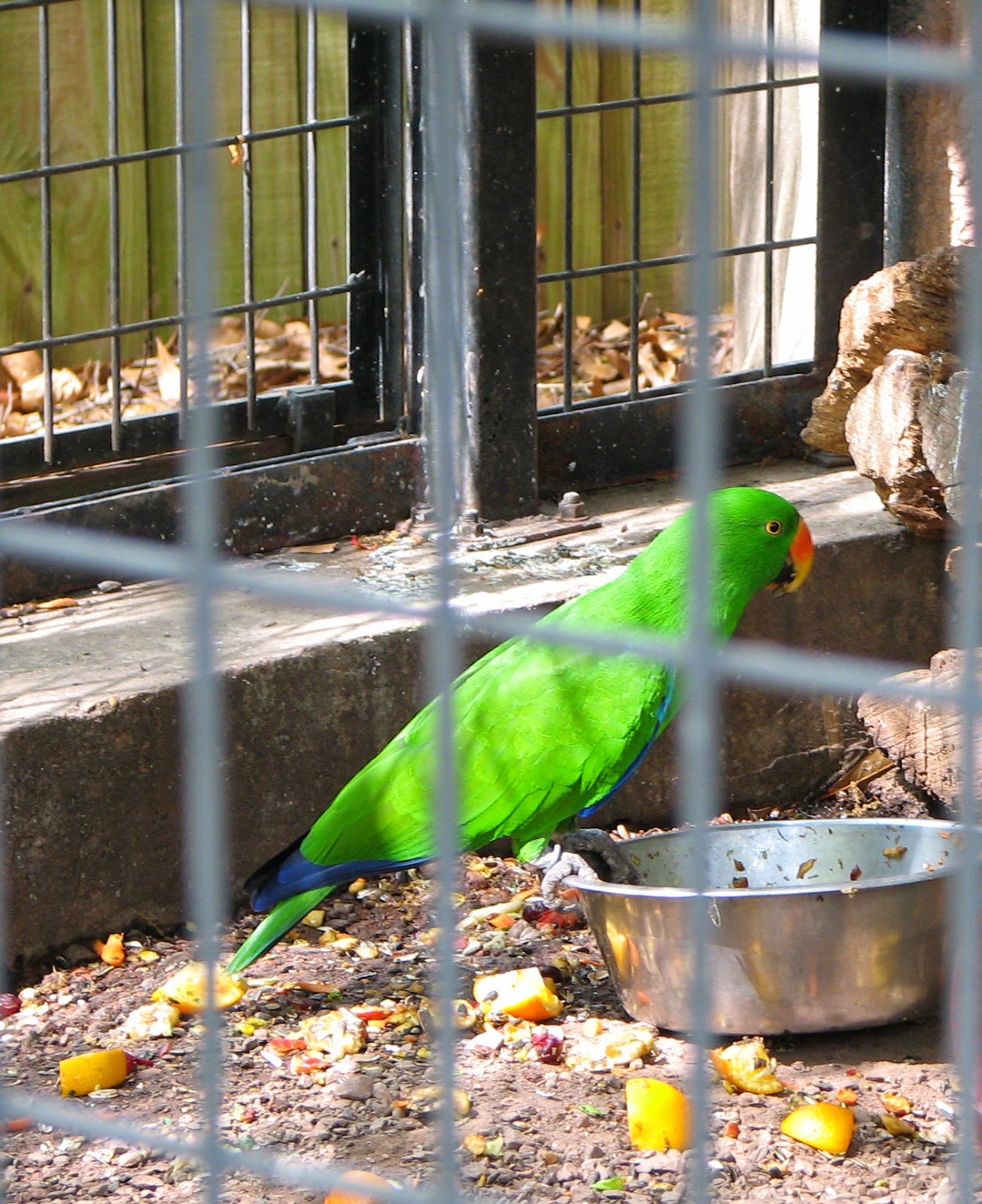 My choices are to stop -- to scratch this blog off my to-do list so I don't have to think about it anymore -- or to pick up its ragged body while it has one breath left and attempt to resuscitate it, to nurse it back to health. At this point I don't know what I want to do.


PS: I once told a co-worker about my dying-bird dream. She then told me she had an almost identical dream, also recurring, except that the victims of her neglect were fish in an enormous aquarium. According to articles on the Internet, these types of dreams are fairly common. Weird, huh?
Posted by Linda@VS at 12:01 PM 7 comments:

Email ThisBlogThis!Share to TwitterShare to FacebookShare to Pinterest
Read more like this: blogging, critters, in my head
Newer Posts Older Posts Home
Subscribe to: Posts (Atom)