Myassa's Dragon -- for Sandy, because she asked

Sandy’s blog, ”To Touch a Unicorn,” is a mystical place, a world of fairy tales and fantasies and all things magical. It touches a spark of imagination that lets my inner child run free, and I love to visit there.

In today’s entry Sandy tells about the Chinese legend of dragons, their origin and their magical powers. If you haven’t read it, go there now; I’ll wait for you. 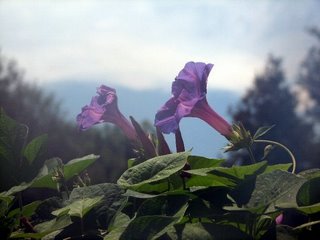 Oh, there you are. Did you have a nice visit?

In response to Sandy’s post, I asked her if she’d ever heard of a dragon that’s become well known to me in recent years. With a smile, she requested more information. Now, I don’t know how old Sandy is, but I’m guessing she’s many years younger than I. Otherwise, she’d know about this legend. Or maybe she does know and just wants to hear the story.

Apparently, many centuries ago, there was a lively village girl named Myassa, who could work all day and dance all night, until one day in her 20th year. On that day, at the edge of the dark forest, she encountered a huge dragon, with blazing red eyes, his body covered in deep-green scales the size of dinner plates. This was not a fire-breathing dragon, oh, no. Instead, it was a fire-inhaling dragon. It stopped in its tracks when it saw Myassa, cocked its head to get a better look, and then, with one mighty intake of breath, sucked all the fire right out of her.

From that day forward, the legend goes, Myassa was just not the same. She still worked –- she had no choice-- but she tired quickly. And if the fiddlers and the pipers played, Myassa was content to watch the others dance and remember the days when her own feet flew.

As much as I loved fairy tales in my childhood, I was an adult before I ever heard about Myassa and her dragon. Even then, when I heard it mentioned, it was sometimes whispered, almost as an apology.

I’d say to my husband on a Saturday night, “I have a good idea; let’s get a babysitter and go dancing tonight.”

I’d ask a friend, “How’d you like to go to the fair this weekend?”

I didn’t have to hear that phrase uttered too many times before I became aware of how dramatically that particular dragon had affected Myassa and all those who encountered it after her. And then, sometime after my 50th year, I met the dragon myself. I've never been able to see its green scales and red eyes the way Myassa saw them, but the dragon has revealed its presence to me in many, many ways.

If you were to ask me today if I’d like to ride with you to Wal-Mart just to get out of the house for a little while, I’d say, “Thanks for asking, but no, I’ll stay home. Myassa’s dragon.”

If you were to see the puffs of yellow dog hair on my floor and wonder why I haven’t swept them up, there’d really be just one reason: Myassa’s dragon.

Myassa’s dragon stole into my life and sucked the energy right out of me, and I will blame it from now until the end of my days for all those things I can’t seem to get around to doing.
Posted by Linda@VS at 7:13 PM