Lest ye think I exaggerate...

About a year and a half ago I posted a photographic example of my ongoing dog-hair problem. There's hair on the floor, hair in the air, and hair constantly falling off the dogs as they walk through the house. It mostly collects itself into tumbleweed-like puff balls and hides under furniture, so it isn't as if I have to kick a path through it. And I don't consider it dirty, exactly, because if the hair were still on the dogs, I'd have no objection to hugging them. It just gets a little overwhelming, that's all.

It would be easier to manage if I could just vacuum up the hair, but there's too much of it. It fills up more than one vacuum cleaner bag, and at five dollars a bag, I can't afford to use more than one per session. So I sweep before I vacuum. I pile all the hair into a corner, sweep the pile onto an open sheet of newspaper, then fold up the paper and put it in the trash.

You can imagine the volume of hair that accumulates if I get behind in the sweeping and vacuuming. Say I'm busy with a barbecue one weekend, a birthday dinner the next, then I get involved in a really, really good book, and then, just when I'm finally getting around to tackling chores, I get invited to trek through a nature preserve instead. Time flies by sometimes; what're you gonna do?

Today, I made up my mind, was no-nonsense day. I got Kadi and Butch both down and brushed them vigorously, determined to get every loose hair off of them before I began sweeping. Then I made a deal with myself.

Sweeping hurts my back, so I decided I'd sweep for 15 minutes, then do something I enjoy for the next 15, alternating until the job was done. I watched TV and drank a Diet Coke after the first 15 minutes, then picked up the broom again. As I swept, my mind began focusing on the possibility of a new creative project, something I've never seen anybody else do.

The timer rang and I got started. First, I needed a spray bottle of water to make my sculpture medium pliable enough to hold shape. After five minutes, I had just what I wanted, so the next step was to photograph it. It took about a minute to get the right shot, then another three or four minutes to get the photo loaded onto my computer. With five minutes left, I opened the photo file into the Paint program and went to work "painting" little facial features. Done, just in the nick of time.

This is supposed to be a vacuuming period, but I'm so pleased with the results of my art project that I couldn't wait to show it to you. Do you know how many times I've joked with people that there's enough dog hair in my house to make a whole 'nother dog? Maybe now they'll believe me. 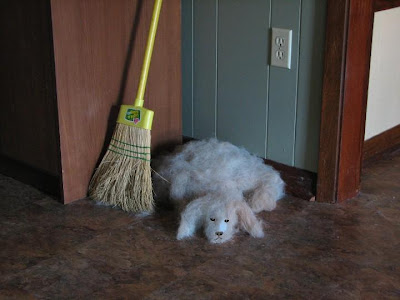 I think I'll name this one Fluffy (may she rest in peace).
Posted by Linda@VS at 1:22 PM