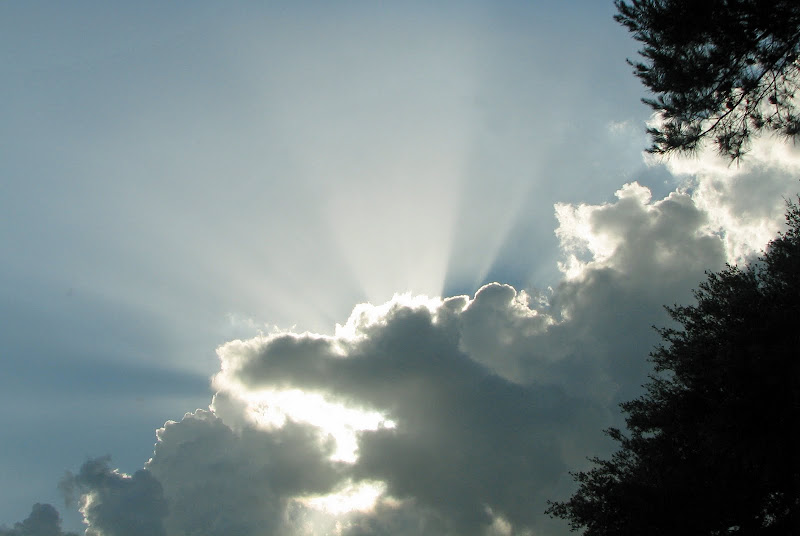 Wishing each of you a basketful of love, joy, peace, and kindness...and, okay, maybe one chocolate egg or marshmallow Peep...on this beautiful Easter Sunday!

Keeping an eye on the neighbors

I've gotten in the habit of taking photographs almost every day, but most days I don't even leave my house. Keeping the photos from being repetitious is challenging, to say the least, so that's where my neighbors' yards come in handy. Sometimes I can stand in my own backyard and see things over (and through) the fence that are photo worthy. Here are a few recent shots:

The first two photos show the efforts of my neighbor up front, the mother of the family who lives across the carport from me. Her green thumb is responsible for the plants and flowers that greet my visitors, as well as hers, and I'm grateful that she has a knack for  gardening. 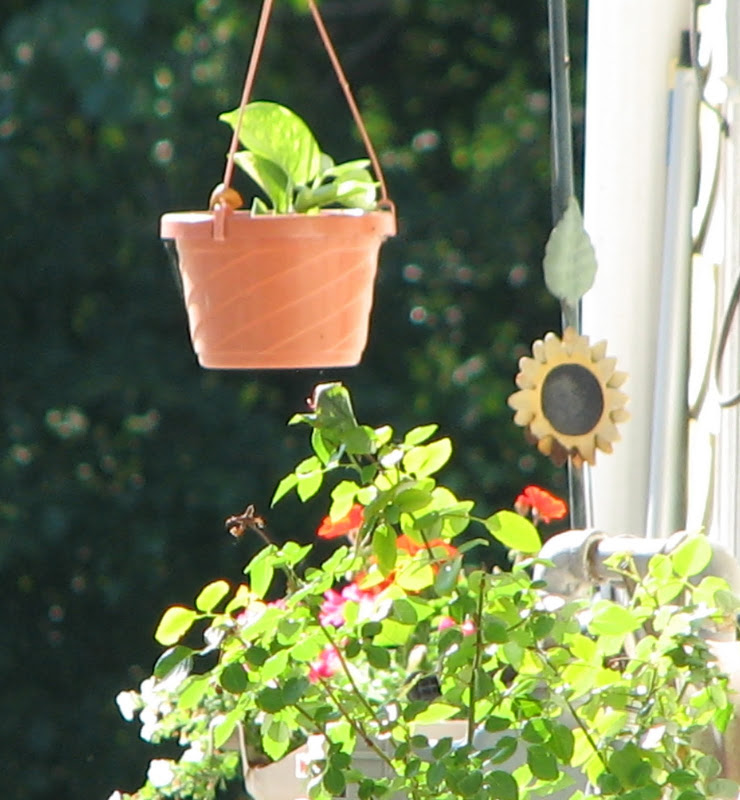 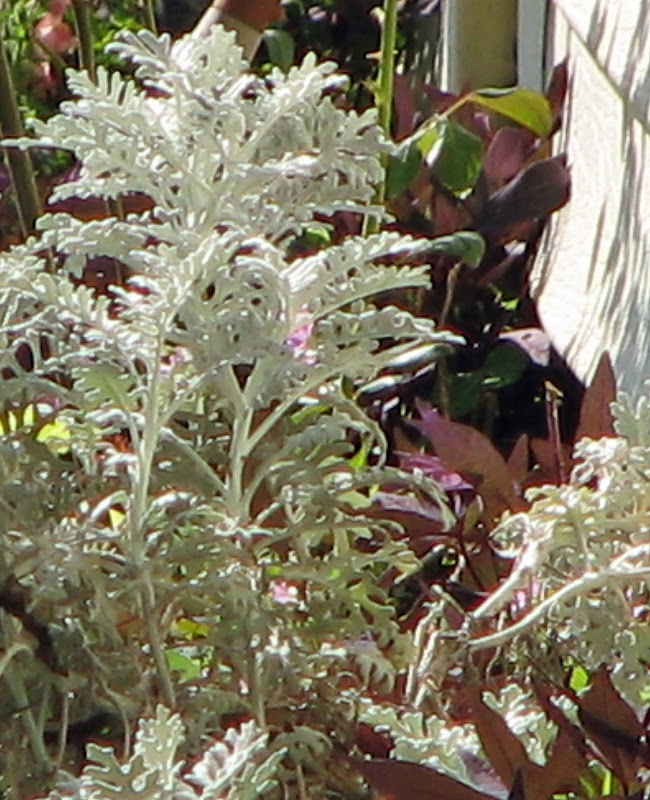 The neighbor on my left owns this precious little dog, Buddy, who runs the fence line with Levi almost every day. This neighbor, too, is a wonderful gardener, one who grows fruits and vegetables as well as a few flowers. Those beautiful pear tree photos I showed you a while back? That tree is hers. 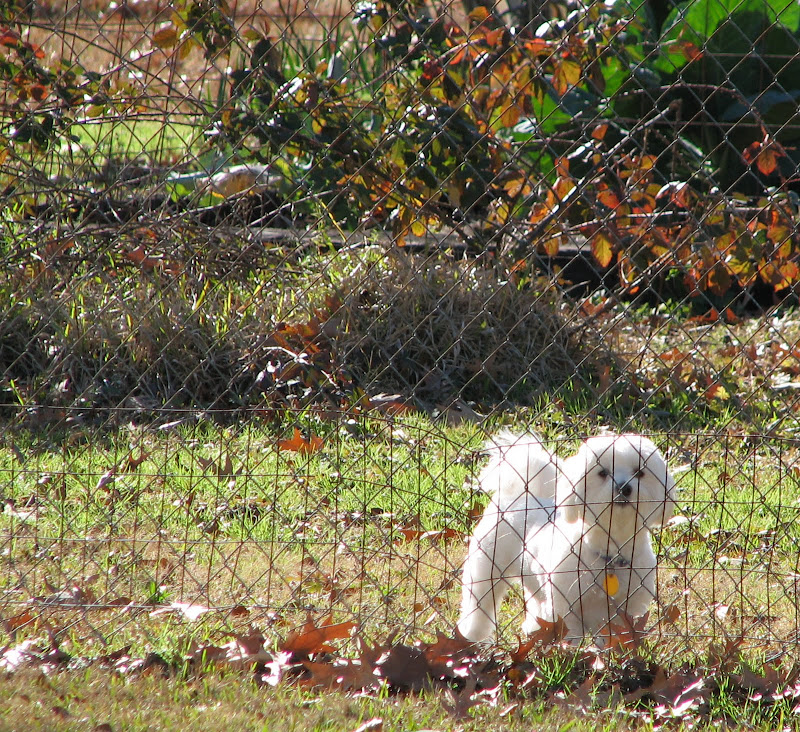 The neighbor behind me has trees, trees and more trees, and I enjoy every one of them. This one, with its leaning trunk, is my favorite, especially when the early morning sun lights up its tender new leaves. 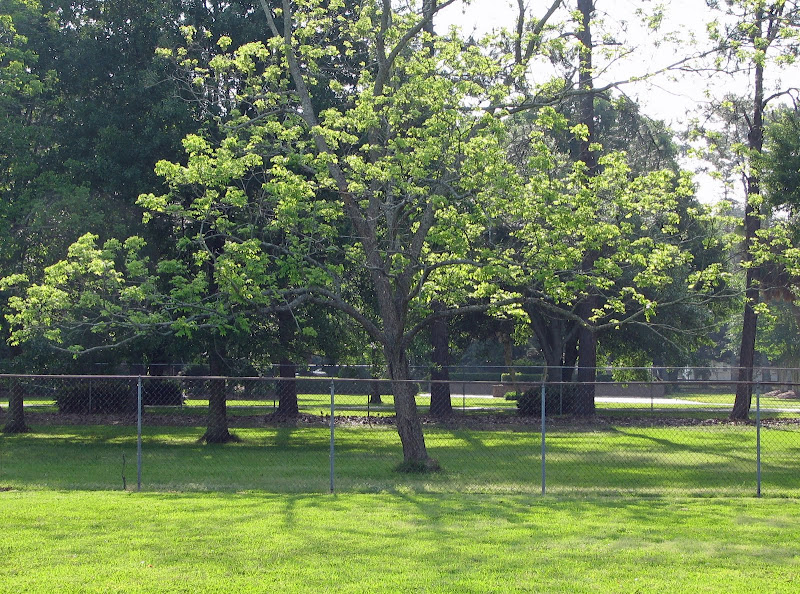 This photo was also taken through the back fence. The geese don't live there, but they've been frequent visitors over the past couple of months. 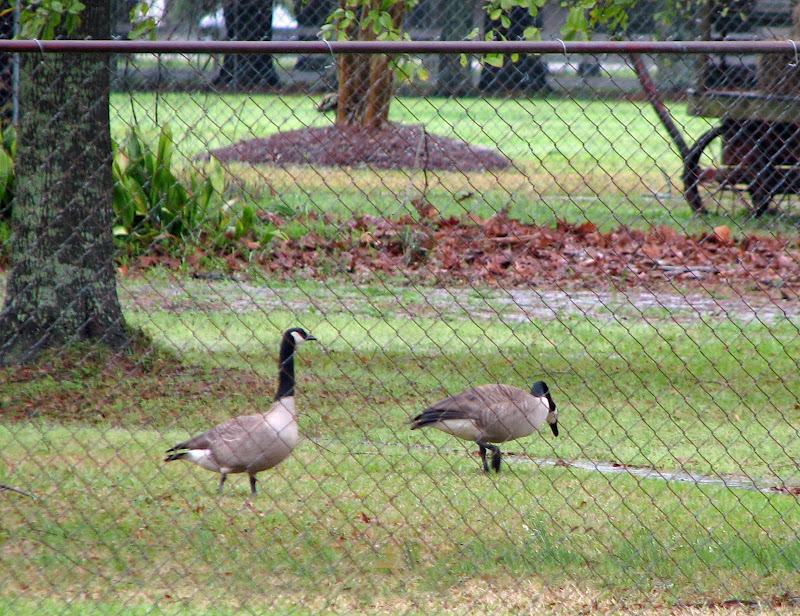 The neighbor on my right does no more gardening than I do (none), but my eyes and my camera lens are drawn to some of the manmade things I see over there.  This wind chime hangs in her carport: 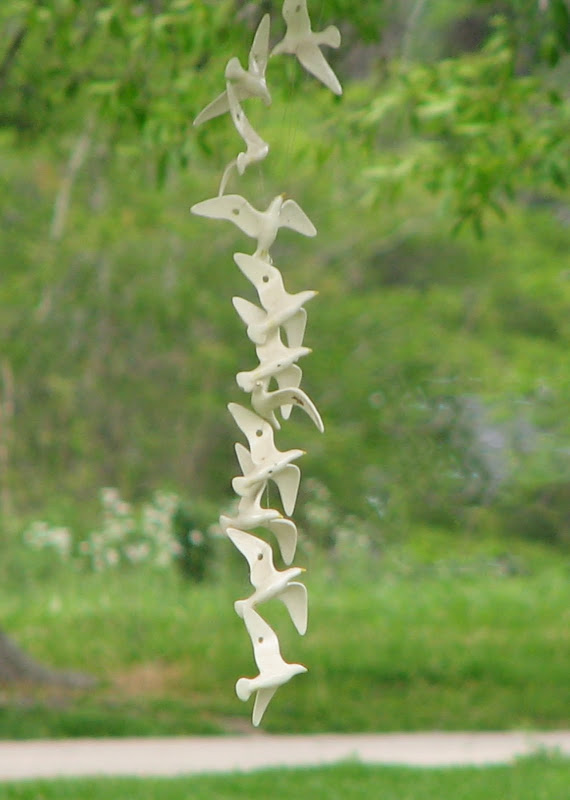 And this stately lion guards her driveway: 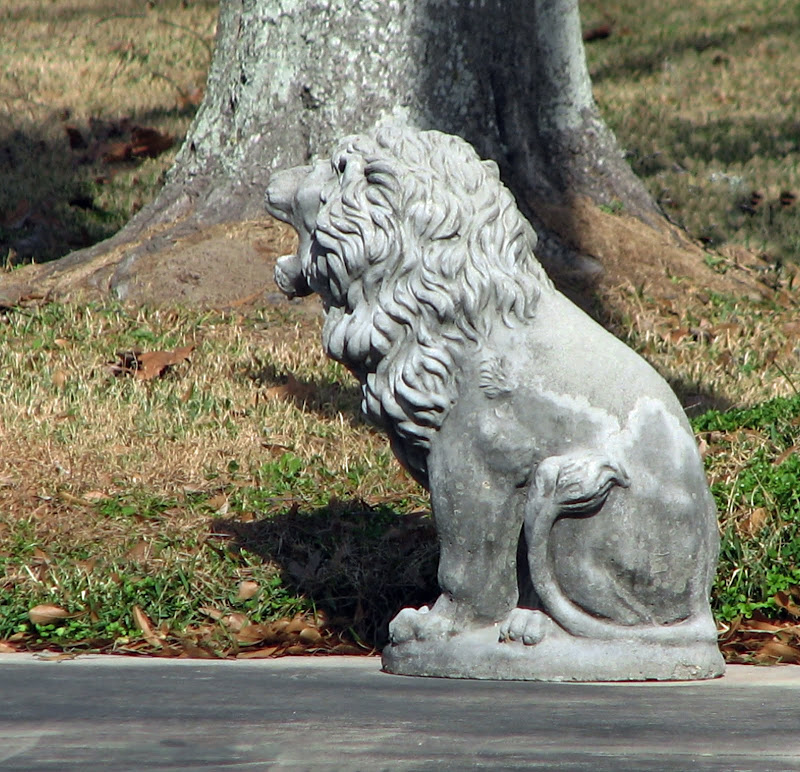 I've never paid too much attention to this house two doors down, but the way the sun was shining on it today made me take a closer look. 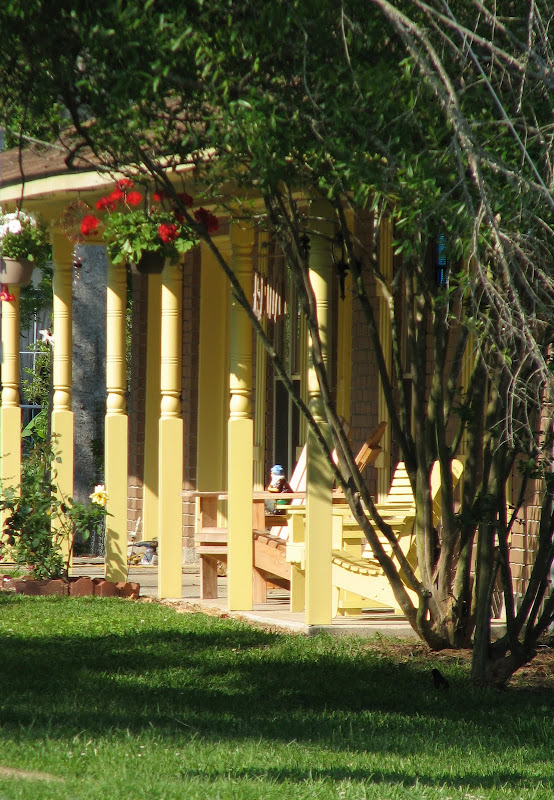 The colors were so bright and cheerful that I thought you might enjoy them, too, and that's how easily this blog post was born.
Posted by Linda@VS at 4:22 PM 6 comments:

Something weird has happened to me in the last month, and I'm wondering if it's ever happened to any of you. On two separate occasions I've awakened after dreaming that I listened to someone singing a song. The odd thing is that I've remembered the tunes and a substantial portion of the lyrics, even though the songs were ones I've never actually heard in real life.

The second dream song was the prettiest one, but I can only remember a few bars of it now, and I haven't been motivated to do anything with it. The first one, though, came to me pretty well packaged. I woke up with the tune for the whole thing and complete lyrics for the bridge. I wrote down those lyrics when I first got up, and before noon that day I'd written four verses to go with the bridge and the melody.

So, what do I do with the next great country western song now that I've written it? Well, since I have neither the talent nor the means to make a demo record and send it to Nashville, I'll share it with you, of course -- at least the lyrics. You'll just have to trust me that there is a tune, but since you can't hear it, knock yourself out and make up your own tune.

Here's my song (the words in italics are exactly as I heard them in the dream):

You made me think I meant somethin’ to you,
You told me that you loved me, now I know it wasn’t true.
The first chance you had you did somethin’ really bad
And you kept on, kept on just doin’ what you do.

You held me close while you told me your lies
Until I learned you’re nothin’ but a cheater in disguise.
The first time I knew someone else was lovin’ you
Was the last time, last time tears fell from my eyes.

Don’t want to be a friend to you,
Just want to put an end to you,
Don’t stick around like you’re hot-glued
Givin’ me attitude,
Take it to the river, dude,
And jump right in.

You say you’ll do anything to make me see
You’ve gotta have me in your life in some capacity,
But you did me wrong so I wrote this little song
Just to tell you, tell you to stay away from me.

You hang around thinkin’ I might take you back,
You say you’re sorry and you’ll get your life back on track.
You say no other man will ever love me like you can,
I say, “Do you, do you think that I’m on crack?”

Don’t want to be a friend to you,
Just want to put an end to you,
Don’t stick around like you’re hot-glued
Givin’ me attitude,
Take it to the river, dude,
And jump right in.


**********
Now, it was Sugarland's Jennifer Nettles who was singing the song in my dream, and Sugarland just happens to have a hit record of their own called Stuck Like Glue, so I'm thinking that my subconscious mind (or the Grand Poobah of Music Composition in the Sky who beamed it into my head) might have been slightly influenced by that song -- although Sugarland's song is about sticking and mine is clearly about unsticking.
Posted by Linda@VS at 4:50 PM 8 comments:

Email ThisBlogThis!Share to TwitterShare to FacebookShare to Pinterest
Read more like this: dreams, in my head, music, poetry

Trinkets and Treasures - No. 3

Here's a small item that I treasure in a big way: 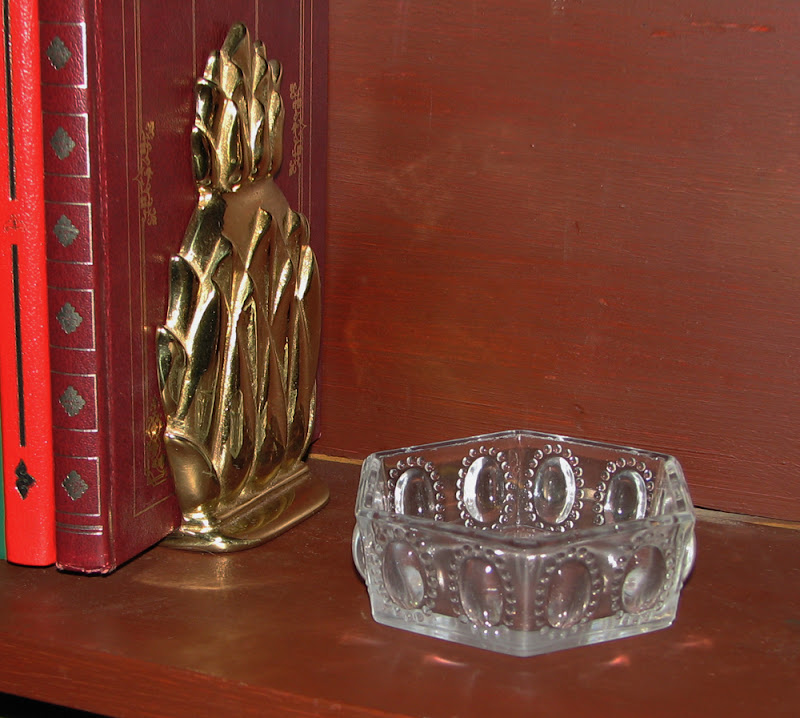 This little glass dish may appear to be empty, but it's actually full of childhood memories. It used to sit on my grandmother's dresser, where it held hairpins and bobby pins at her fingertips when she swept up her hair each morning.

My grandmother also had a large, heavy, V-shaped magnet, and I loved to play with the magnet and the bowl of bobby pins. I would dump the pins out on Mammaw's bedroom floor and arrange them into an elaborate design, only to eradicate the whole thing a minute later with one grand sweep of the powerful magnet. Then I'd do it all over again. And again and again.

(It occurs to me as I'm writing this that I can only think of one other thing that fascinated me in a scientific way as much as magnetic attraction did when I was a child. That other thing would be the way mercury from a broken thermometer spilled out onto the floor and formed tiny silver balls that we rolled around with our fingertips one long afternoon, smashing the larger balls into many smaller ones, just as round, then pushing the tiny balls back together to form a large ball again. No child would be allowed to play with mercury today, but if that exposure harmed me in any way, I'm not aware of it. Then again, maybe that could explain a thing or two.)

I don't know what happened to my grandmother's big magnet, but the pretty glass bowl came home with me after she passed away. I'm glad to have it as a reminder of those times and as a link between her life and mine. To make things even better, I have this picture (taken in 1950) of Mammaw doing her hair, the little glass dish on the dresser in front of her: 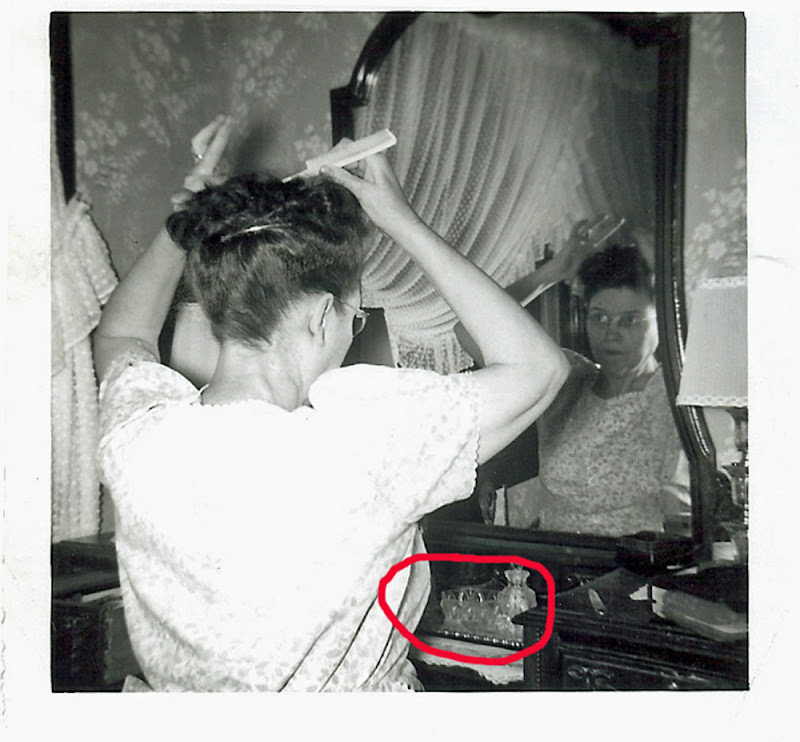 Email ThisBlogThis!Share to TwitterShare to FacebookShare to Pinterest
Read more like this: family, genealogy, in my head, photos, trinkets and treasures
Newer Posts Older Posts Home
Subscribe to: Posts (Atom)