"Heeeeeere I come to save the daaaaaay..."

Half an hour before dark yesterday, I sat down to see what was on TV. Kadi lay nearby, but Butch had elected to climb onto the futon in the den rather than join us in the living room.

Just as I got comfortable, Butch began to make "grrruffff" noises, quiet little sounds that are half growl, half warning bark. After he'd done it three or four times, I could hear his feet scrambling to get off the futon, and I knew I was in trouble.

We had come back in the house less than ten minutes earlier. I knew he didn't need to go outside again. Whatever was bugging him didn't seem to be bothering Kadi, so I felt fairly sure there was no danger lurking at the back door. Nevertheless, here he came, dancing around me like a prizefighter before the first round, his ears perked up Rin Tin Tin style. "Butch," I said sharply, "go lay down." Huh-uh. Not gonna do it.

Instead he began barking louder, a desperate, high-pitched, pleading sound that fell somewhere between a whine and a bark, letting me know that his business was urgent, that life as we knew it would cease to exist if I didn't let him outside immediately. It was Butch's impersonation of Lassie's "come-quick-Timmy's-in-the-well" speech. I decided it was easier to let him out again than to try to reason with him.

When my feet hit the floor, he whirled around and ran full-speed through the house, barely missing end tables and dining room chairs, and hurtled through the back door the instant it was opened. I swear the size of his chest expanded with each step as he ran toward the back fence, barking fiercely all the way.

Fearful that he'd smack headlong into the fence, I called repeatedly for him to slow down. He didn't drop speed, but he did manage to pull himself to an abrupt stop just a few feet short of a crash. By then I could hear the distant HONK-pause-HONK-pause-HONK of a neighbor's car alarm. Evidently, that was the sound that had provoked Butch's distress. He faced the general direction of the honking sound, threw his head so far back it lifted his front feet off the ground, and gave four mighty barks in succession. Then he listened for about five seconds and did it again.

The barking continued -- four barks, listen, four more barks -- until somebody, somewhere, turned off the car alarm. As soon as the honking stopped, Butch cocked his head at various angles to listen carefully, then turned back toward the house. He seemed pleased with himself. He held his head high, did a perky little trot-step all the way back to the door, stepped inside, made his way straight to the living room and lay down to rest.

So what if he can't see? The man of the house has to step up and take charge when a situation needs correcting. Good job, Mighty Dog! 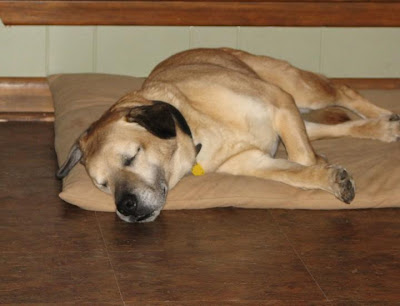