I have come to the store equipped with a detailed list, items grouped together according to aisle location, and have traveled from one corner of the store to the other, gathering my goods in record time. I survey the check-out area and find more closed registers than open ones. I briskly roll my cart to the end of the shortest line. There are three people ahead of me, none of whom has a large number of items. This should be quick.

I survey the covers of the tabloids and the slick magazines with pictures of celebrities or fancy desserts on their covers. Nothing I need there. I glance at the lighters, nail clippers, and single-serving bags of beef jerky, then inventory the candy bars in search of new products. I don't eat sugar anymore, but it's good to stay abreast of new developments. As I begin to check out all the different types of chewing gum, it occurs to me that the line hasn't moved since I got into it. Not one step.

The lady in front of me has begun to shift from one foot to another and to glance around nervously in all directions, like she's getting ready to bolt. The woman in front of her appears agitated, too, but she's stuck because she's already piled all her stuff on the counter. Now that I'm paying attention, I look at the person at the head of the line and, presto, I see and hear the problem simultaneously.

This woman, who has been in the process of checking out since before I got in line, is talking, talking, talking, non-stop, to the frazzled cashier, to the new trainee clerk, to people in other lines, to everybody within earshot. People are looking away from her, refusing to make eye contact, all but dropping to their knees and praying for her to just shut up. For a second.

She is enormous, this gabby woman. (I use the term "enormous" in a descriptive sense, not a disparaging one, because a thin person could run her mouth just as easily. The word "gabby," though, is intended to be disparaging.) She is wearing a very bright, frilly blouse, and she's talking with her hands, so that the colors of her blouse seem to blur with her quick movements. She rotates in bold semi-circles, keeping an eye out for anyone who's open to a little friendly conversation.

The cashier has finished ringing up the order and is waiting for the woman to pay. Only then does Talkative Tina reach into her cart and rummage around through the plastic bags she's just piled in there. Finally, she retrieves her purse. The purse is enormous, too. It's silver-grey, faux leather, and has big, cutesy ruffles on both sides. Here's a sketch of the purse: 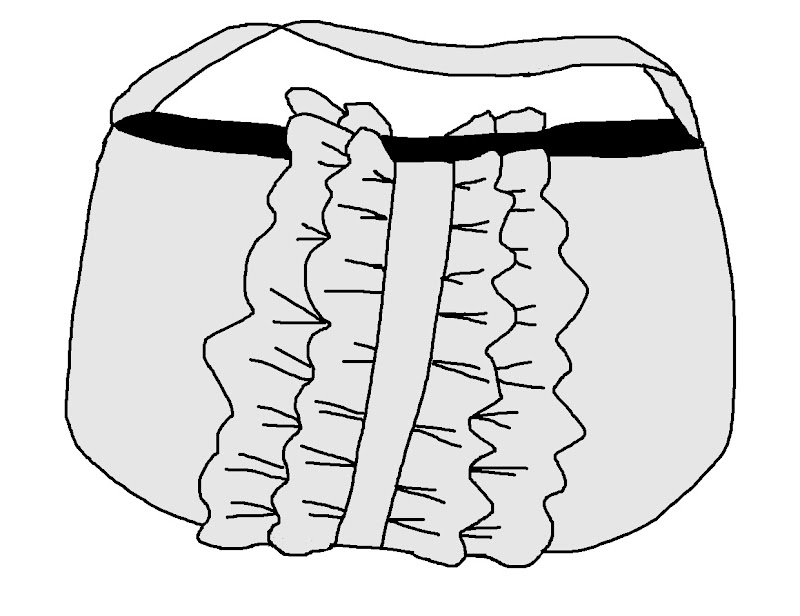 The woman's incessant chatter has been grating on my nerves, and now, curiously, I find myself feeling some animosity toward her huge, ruffled purse. I understand that this makes no sense, but the longer I stand there, the more I despise that purse.

Jabbering Josephine hefts the purse up onto the counter (no easy task, that) and starts digging in it with both hands, momentarily interrupting the gestures that have thus far accompanied her words. Bingo! One fist pops up with a wallet. A matching wallet. And I'm not kidding. 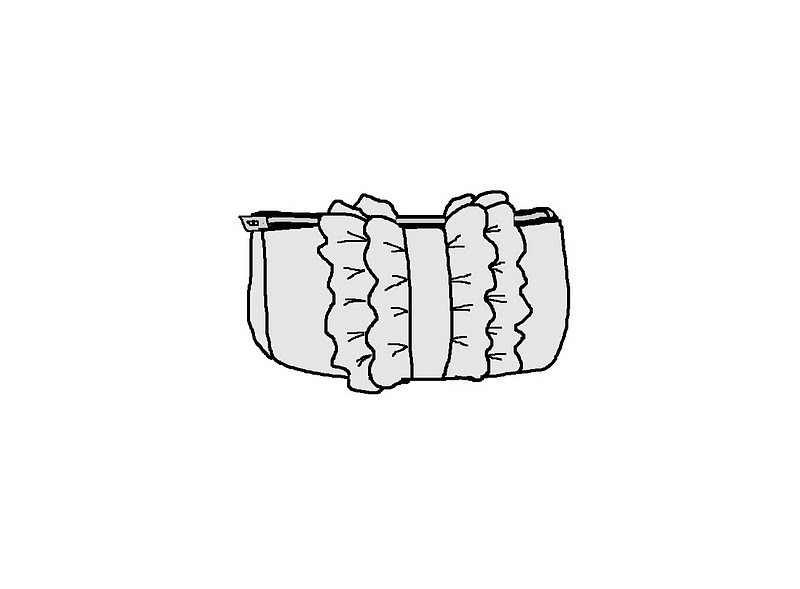 I instantly detest the wallet, too.

Babbling Bertha opens the overstuffed wallet and begins to write a check. I'm thinking this might slow her down to at least a low-level mumble, but no, she's a multi-tasker. She writes and talks at the same time, all the while looking around to make sure she still has an audience.

Aha! A tired-looking woman, probably a grandmother, rolls onto the scene with a beautiful baby girl in the seat of her cart. The baby's head is dressed in a colorful elastic band with a giant bow on it, and she's screaming her little gift-wrapped head off. As the grandmother tries to move to the end of the line, the chatterbox whirls on the baby and begins cooing to her. "Whatsamattah wif oo, weetiepie, is oo hungry? Is oo tired? Does oo need to go beddie-bye?" She reaches a dimpled arm out and begins to poke the baby, who cries even harder. The grandmother rolls her eyes and takes two assertive steps forward, leaving the baby-poker with a half-written check in one hand, a pen in the other, and a shocked expression on her face. Do you think she returns to writing her check? No. She steps out into the aisle and yells to the back of the baby's head, "Welllllll, okay, sweetums, I hope you have a better day. Goodbye, babykins, okay? Bye-bye, now."

Only then does she turn back to smile at the cashier, who by now is leaning on one elbow and propping her chin in the palm of her hand. The trainee's eyes are about to pop out of her head. She looks at the rest of us who are waiting in line, offers a tentative smile and a shrug of her shoulders.

I am no longer looking at Prattling Patty. My eyes, my thoughts, my irrational anger are all focused on her ugly purse and her stupid matching wallet. If my eyes were lasers, they would burn holes in the side of her purse. I have a mental image of that silvery fake leather beginning first to smoke, then to blaze, the fire making a black-edged hole through which I can see sparks falling on used tissues, old grocery lists, and empty Twinkies wrappers. Somehow, while I'm mentally burning the woman's purse, she manages to finish writing her check and leaves the store. I don't even see her go.

Minutes later the three of us who have waited in line behind her have all checked out, and I'm on my way home. I put my groceries away, then seat myself at this computer while the images are still vivid in my mind. I carefully draw that ruffled purse and wallet to the best of my ability. I realize as I draw them that they probably aren't as ugly as I first thought they were. But I hate them because my eyes have overdosed on an excess of fluff and frills and ruffles and because gibberish is still echoing in my ears. I hate them, I tell you, yet I'm kind of excited at the idea of showing them to you.

Obsessed much?
Posted by Linda@VS at 1:12 PM

Email ThisBlogThis!Share to TwitterShare to FacebookShare to Pinterest
Read more like this: challenges, drawing and painting, stories