I'd been out of bed for about twenty minutes when the telephone rang. At that time of the morning I expected either bad news or a telemarketer. Instead, it was my daughter Kim, sounding unusually chipper for the early hour. Kim moved to a new house a couple of weeks ago and is still getting settled. "Mom," she said, "my whole house is surrounded by hot air balloons. Do you want to come over and bring your camera?"

You bet I did.

I brushed my teeth, combed my hair, pulled on yesterday's clothes, called the dogs back in the house, changed the batteries in my camera, and took off. Kim's new house is only about ten minutes away, but I worried the whole way there that the balloons would be gone. Instead, as I turned into her subdivision, I saw this hovering over the treetops: 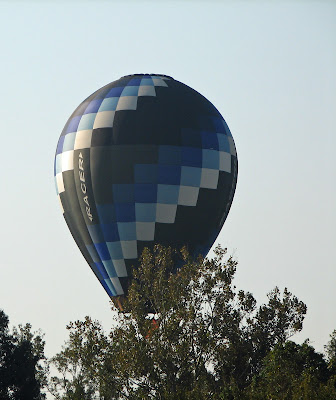 As excited as I was to see even that rather sedate (funereal) balloon, it was only the beginning. Behind Kim's house is an empty field that must have looked like a good landing area to the balloonists, so we stood out there awhile and watched as other balloons touched down.

(Note:  I've kept these photos small in hopes that they'll load a little faster for you, but I promise you'll enjoy them much more if you'll click on them to view bigger versions.) 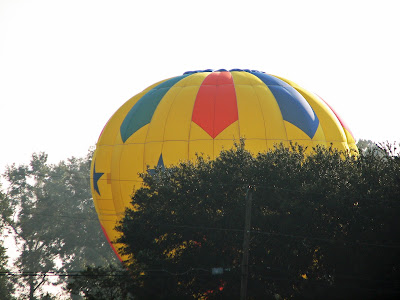 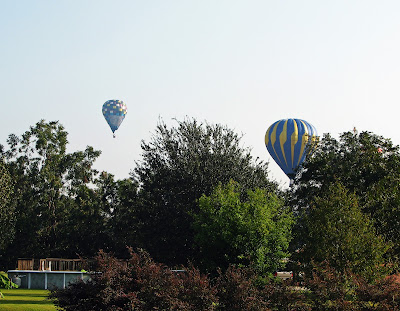 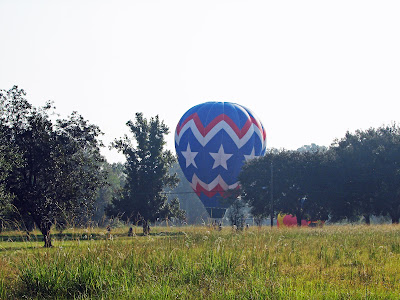 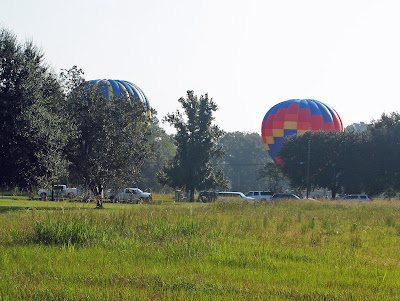 This shot shows some of the chase vehicles that
follow on the ground to pick up the balloons and
their pilots after they land.

I especially enjoyed watching this beautiful specimen fly directly over our heads: 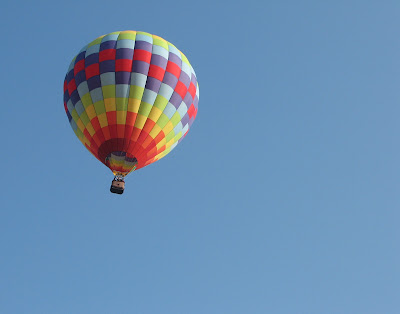 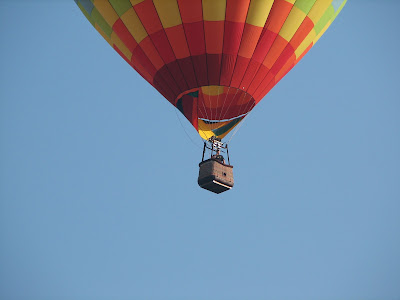 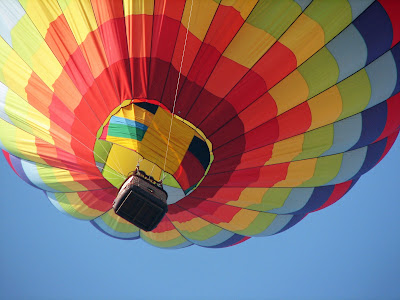 When we headed around the house to the front yard, we were delighted to see that we weren't the only ones excited by the appearance of the hot air balloons. Neighbors poured out of their houses like ants on their way to a picnic. It isn't every day that colors like these drop from the sky and land smack in the middle of suburbia. 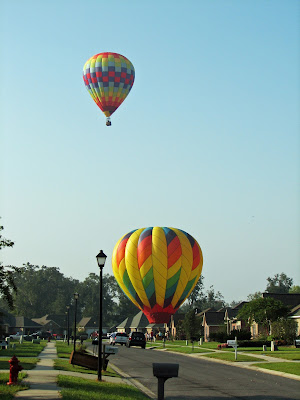 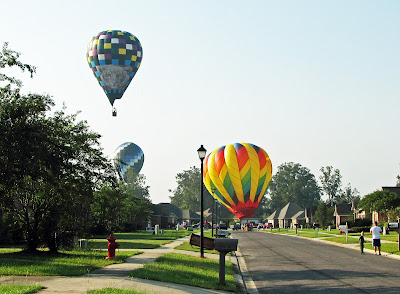 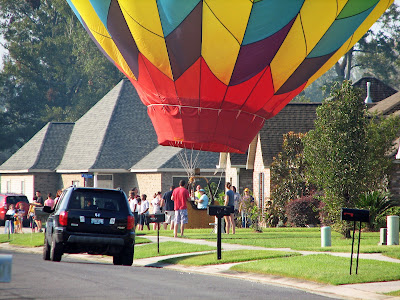 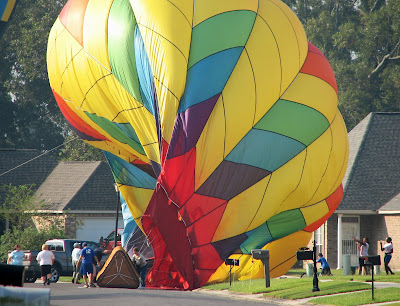 Neighbors watch as the pilot and the chase team deflate the balloon.

Now, I named this post "Ascension," which might seem misleading in light of the fact that all these balloons were photographed as they descended, but I chose that title for a couple of reasons. For one thing, we citizens of Ascension Parish, Louisiana, are proud that the annual Louisiana Hot Air Balloon Championship Festival has moved here for the first time. I hope the participants will find everything to their liking and come back year after year.

Secondly, my mood lately has been marked by a subtle wistfulness, blues of an unknown origin. Nothing is wrong, yet it's seemed like too much work to do any significant house cleaning or to put my thoughts into a coherent blog post. This morning's events may have been all I needed to climb out of the doldrums. Who can hang on to that grey space when the sky is full of brilliant colors? Yes, the balloons were on their way down, but watching them--and seeing the happy faces of Kim's neighbors--made my spirit soar.  Talk about "ascension"!

What I've Been Reading

One Mississippi by Mark Childress 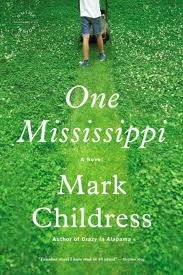 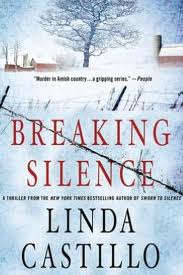 The Promised World by Lisa Tucker 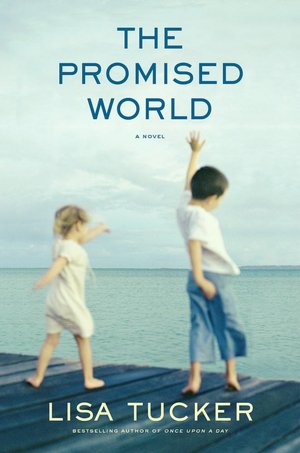 A Sudden Change of Heart by Barbara Taylor Bradford 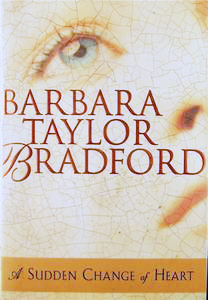 For a description or reviews of any of these books,
click on its image above.
Posted by Linda@VS at 6:42 PM No comments:

We hadn't played backyard ball since before the Hurricane. The yard has stayed so wet and muddy from the storm's heavy rains that even a short trip outside with the dogs means I have to hose off their feet before they can come back in the house. Today, for probably the fiftieth time this week, Levi and Gimpy approached me with the tennis ball and a pair of hopeful faces. And today I gave in. Labor Day and backyard ball games just go together, don't you think? 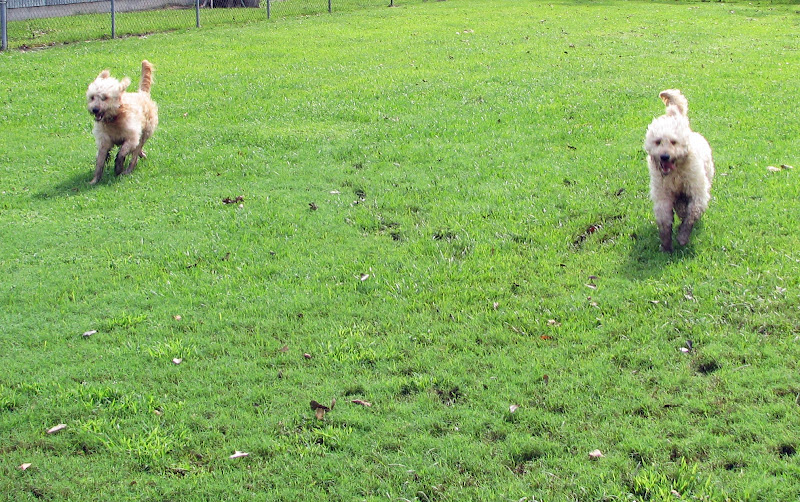 All the dark spots on the ground in this photo are mudholes,
and there's plenty more of it underneath the grassy surface. 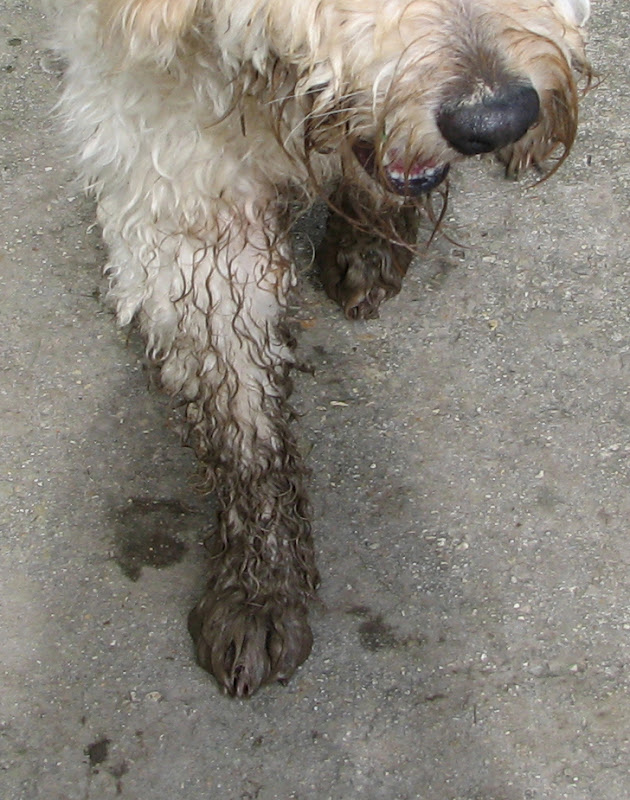 How'd you like to wash these paws eight or ten times a day? 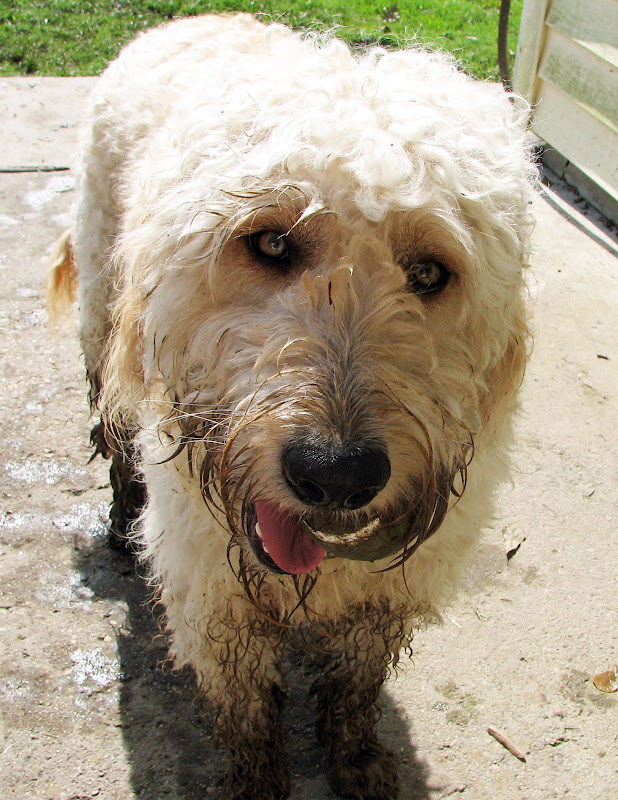 Here's Levi, begging me to throw the ball one more time. 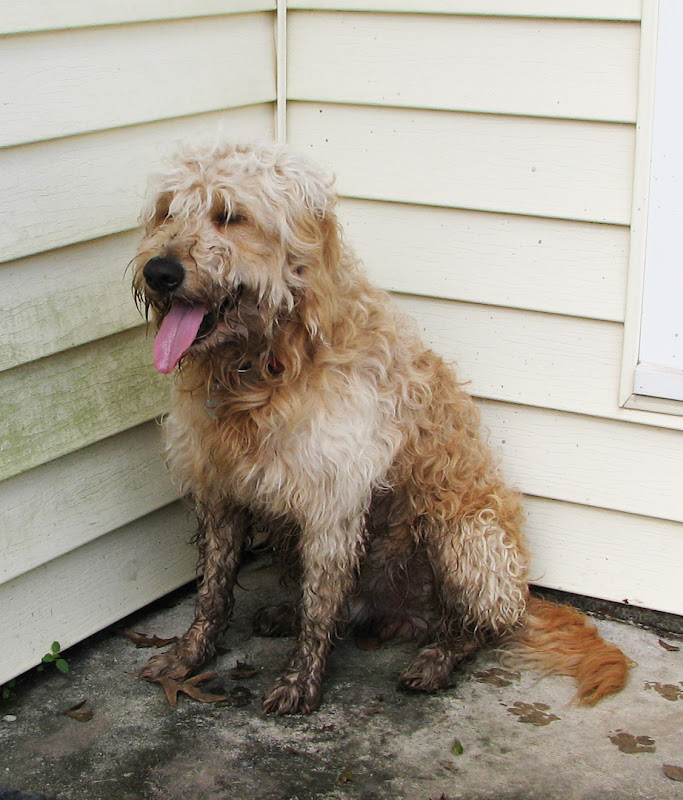 And here's Gimpy, awaiting his turn with the dreaded shower spray.

Three of us played ball this morning. Two of us--the hairy ones--had a wonderful time, right up until the bath at the very end. Who says, "There is no joy in Mudville"?
Posted by Linda@VS at 11:25 AM 3 comments:

Among the Lucky Ones

Hurricane Isaac came to Louisiana and stayed. And stayed and stayed. Its rains are still here, as a matter of fact, causing area waterways to continue rising well past the point where they've flooded hundreds of homes and made many roads impassable. But it could have been so much worse.

We are among the lucky ones. Some of my family members have been threatened by the rising waters, forced to pack up everything important to them in case parish-operated pumps failed and evacuation became necessary, but that didn't materialize. Another family member was greatly inconvenienced when plans for a move to a new home, scheduled for today, had to be canceled and all the components of such a move put back on the table to be organized all over. You won't hear anyone complaining, though.

As for me personally, a few shingles flew off my roof. The yard is littered with tree trash, but no big limbs fell. The power stayed on throughout the entire storm, then flickered off quite a few times yesterday, staying off just long enough to reset the clocks on my kitchen appliances and the router on my computer. Throughout the main thrust of the winds, though, we remained cool, well fed, and able to keep abreast of the latest hurricane news.

In my home the worst part of Hurricane Isaac was the anxiety it produced, mostly because of the mental tapes of Hurricane Gustav that kept replaying in my head. As comfortable as I was--and as grateful as I was for that comfort--I kept expecting life as I knew it to come crashing down at any moment. Preparedness is helpful in an event like this. But worry? Not so much.

Isaac was a storm of wind and water, but no thunder or lightning accompanied it in our area, so the dogs were not disturbed. Bored, yes, but not frightened. 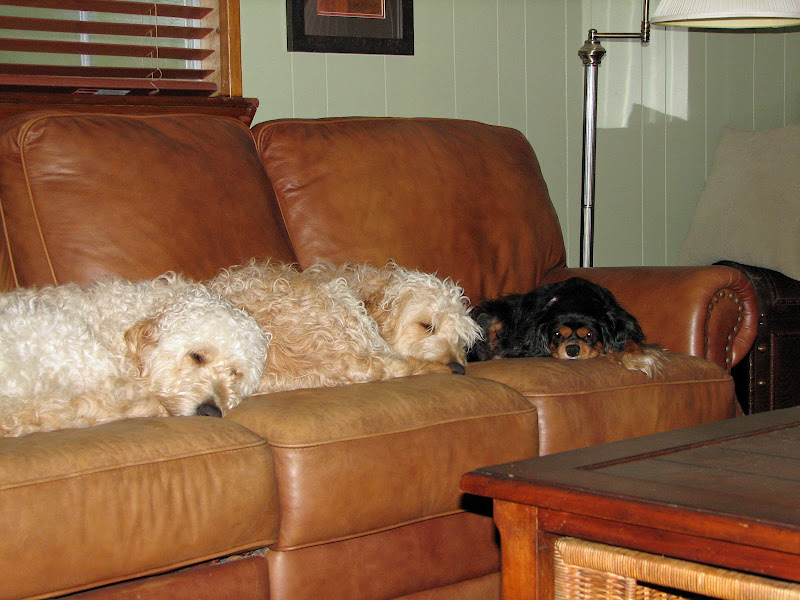 They balked at going outside in the horrible weather (which I think demonstrates their keen intelligence), and the humans in the house learned that the canines are capable of "holding it" for far longer than has ever been necessary up until now. When they did go out, they made a quick dash of it, then returned indoors to focus on what matters to them every other day: suppertime and tennis balls.

As happy as I am to report to you that my loved ones and I are safe and well, I'm saddened by the devastation so many others have experienced as a result of this hurricane, and I pray that they find all the help they need to get quick relief from the heat, the water, and the destruction that has literally rained down on them. At times like this, being one of the lucky ones can leave a person feeling not only happy, but also undeserving. "There but for the grace of God..."

Today is Saturday, after all, so I feel compelled by habit to post a music video. The subject of this week's Saturday Song Selection is an earlier Louisiana hurricane. The old photos used in the video are captivating.

The song is "Louisiana 1927" by Randy Newman.
Click here to read the lyrics.
Thanks to WestHam712 for posting this video on YouTube.
Posted by Linda@VS at 5:54 PM 2 comments: