My niece, who didn't meet Butch until a year ago, told me then that she'd like to see a picture of him from the time before he lost his eyes. I hope she agrees with the old saying about "better late than never." 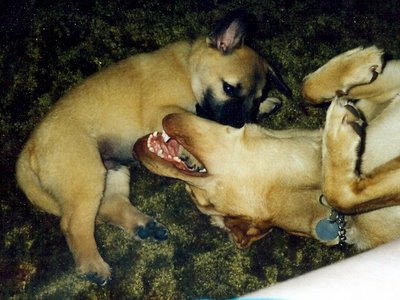 My fat, bright-eyed boy, shown here playing with big "sister" Kadi, was no more than eight weeks old when we snapped this shot. Couldn't you just take a bite out of that plump thigh? 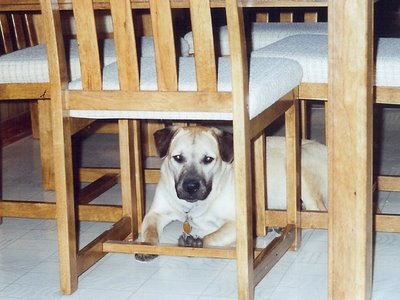 In this one, still bright-eyed, he was about nine months old. This was after he discovered the pleasure of sleeping in my dining room "fortress" but before he chewed up the rungs on every single one of these chairs. 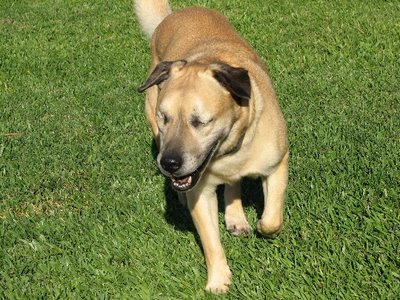 This is a shot from just a couple of months ago. Butch is eight years old now. His muzzle isn't as black as it used to be and, of course, he has no eyes, but I still think he's a handsome dog. 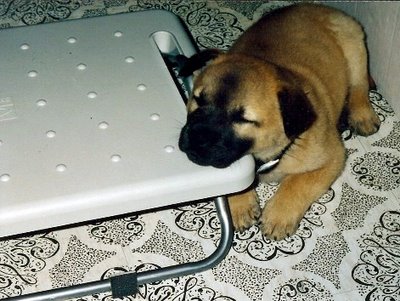 In fact, to my way of thinking, his face these days looks pretty much like a grown-up version of the sweet pup shown here sleeping under my computer desk. This is the baby boy who stole my heart. He still has it.
Posted by Linda@VS at 7:59 PM