And so this is Christmas

The Christmas shopping is done, the house is clean, the fridge is full of food -- and I had help with all of it, thank goodness. If I'd had to do everything by myself, I never would have made it to this point. If there'd been an extra minute to write something here, I'd have told you about some of the following:


And, since I have so much time off, I hope to be back here soon to fill in the details of at least a few of those topics listed above. In the meantime, I hope all of you spend a safe, happy Christmas with the people (and animals) you love.

Peace and blessings,
Velvet, Kadi and Butch
Posted by Linda@VS at 5:13 PM 7 comments:

My phone rang at 6:30 this morning, fifteen minutes after the alarm had sounded but before I'd managed to crawl out of the warm bed. It was my daughter, Kim, whose first words when I answered were, "Look out your window; it's snowing."

Local weather forecasters had predicted we'd have a "wintry mix" this morning, so I expected to see a few tiny flakes in the air. Instead, the ground was frosted white and the flakes were big, fat, fluffy ones. I've been in Louisiana for 30 years and have never seen more than a very light dusting of snow here, so this was exciting.

I couldn't wait to show it to Butch and Kadi. As I put on shoes and threw a coat over my bathrobe, I was sorry Butch wouldn't be able to see it and wondered how long it would take him to discover that something was different. Not long, it turned out. He hadn't taken more than three or four steps outside before he felt the snowflakes kissing his cheeks, pointed his nose skyward, wagged his tail, and turned around a few times with his head in the air.

Kadi, of course, noticed the white blanket and the falling flakes as soon as the door was open and raced outside into the thick of it. She played a while longer than usual before asking to come back inside.

After our first venture in the snow, we had to wait another hour before there was enough daylight to take pictures. Here's what my backyard looked like then: 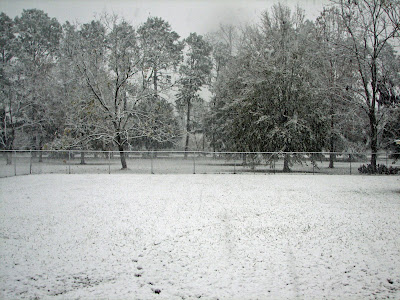 A few minutes later, the snow still falling fast, I walked back through the house and out the front door. Here's the little patch of woods across the road: 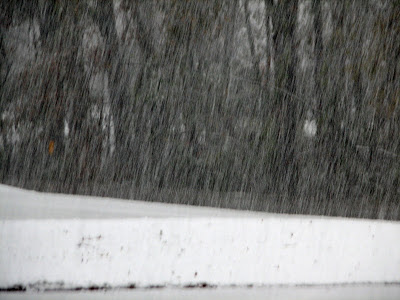 The pretty tree at the right of this photo is my neighbor's pear tree: 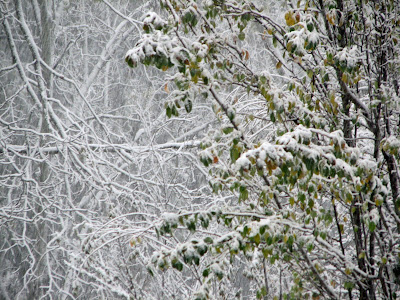 By 1:00 in the afternoon, the snow had melted off of all the roads, a lot of the lawn, and most of the trees. This is how the backyard looked then: 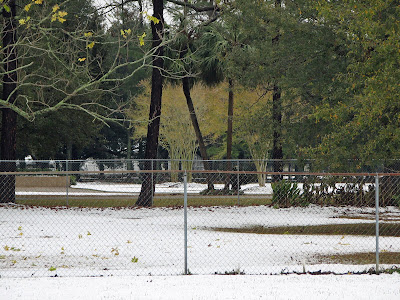 If you look at Butch's footprints in this early afternoon shot, you can tell that we'd had at least two or three inches: 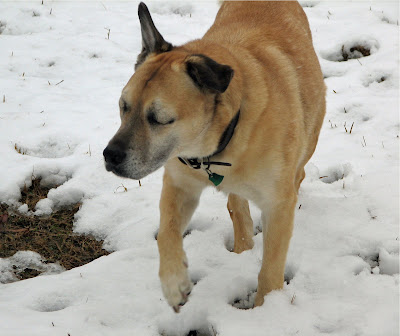 In fact, back near the garden shed, the snow was all the way up to Kadi's belly: 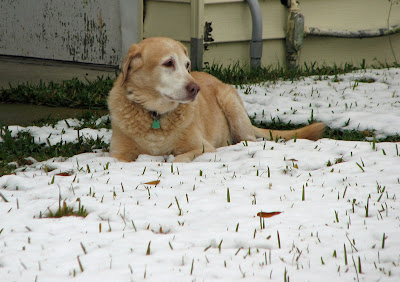 For the past week my thoughts have been scattered, flipping rapidly between operational budgets at work and Christmas shopping lists at home, leaving me with little blogging time and no well-thought-out topic to post about. Instead, I'll share with you just a few scraps of things that have crossed my mind:

When do the comments commence?
Last week I discovered that Blogger has a new option which reportedly allows comments to be embedded at the end of a post instead of on a pop-up screen or a separate page. The notice about the new option stated it's easier for commenters, and, as it's a feature I've admired on Wordpress blogs, I was tickled to select that option. Apparently they haven't worked all the kinks out of it yet. After getting a couple of e-mails letting me know readers were unable to leave comments, I switched it back to the old, tried-and-true method. Nothing good comes easily.

Verifiably nutty
Speaking of comments, when randomly generated word-verification letters pop up on my monitor, I jot down the interesting ones for my own amusement. Here are some recent ones, along with potential definitions:
1) zeolzens -- Mary Kate and Ashley in Paris
2) placeta -- A location, like a "place-ta" hang your hat.
3) voidists -- People who disregard everything you say.
4) kabal -- A conspiracy of diners at the Kountry Kitchen.
5) latedly -- How birthday cards I send tend to be.
6) bradys -- Mike, Carol, Greg, Peter, Bobby, Marcia, Jan and Cindy.
7) motortil -- Common phrase in the auto repair industry: "I won't fix your motortil you write me a big check."
8) sesanati -- A big city in Ohio.
9) merbopp -- A popular mermaid dance in the 1950s.
10) fadedine -- The condition of trying to eat when you're about to fall asleep.

Something fishy
Sometimes words offered up by spell checkers play tricks on unsuspecting posters. I saw the following comment on a political blog recently: "Obama is right, war is a salmon decision." Um...a solemn decision, maybe?

One way to love a dog
Because Butch gets frequent ear infections, I have to clean his ears weekly with an antiseptic solution, a process which he hates. To try to make it just a little easier for him, I've been holding the squeeze bottle of solution between my thighs for the past 45 minutes.

New use for an old household item
Have you read that some people are smoking duct tape these days? It's true. In fact, here in Louisiana you can't buy duct tape without proof of identification showing that you're over 18 years old. At the grocery store last week, the guy in line next to me wanted to buy a roll of duct tape and a bottle of motor oil. When the cashier explained why she'd need to see his ID, he shoved the items toward her, said, "Tell 'em they can kiss my a$$," and stormed out of the store. I hope his car didn't fall apart in the parking lot.

Senate seat for sale
I can't go to bed tonight without commenting on Illinois's governor, Rod Blagojevich, who was arrested today for reasons that included an attempt to sell Obama's vacated senate seat. Following a political season that made me think politicians' egos couldn't get any bigger, this governor proved me wrong. This is so outrageously appalling that it strikes me as really funny. Maybe I'm just laughing in relief that, for once, it isn't a Louisiana politician making this kind of news.
Posted by Linda@VS at 9:11 PM 6 comments:

Email ThisBlogThis!Share to TwitterShare to FacebookShare to Pinterest
Read more like this: blogging, dogs, general, in my head, stories

This has been a fairly productive day. Work was busier than usual but still manageable, which gave me a sense of accomplishment.

After work I stopped to buy groceries on the way home. By the time I got to the deli at the grocery store, they had two plates of meatloaf, mashed potatoes, and gravy left, so I bought one of them.

When I got home, I put the groceries away, took the garbage out to the curb, sorted laundry, and put one load into the washing machine, all the time eyeing the meatloaf that would be my supper. It smelled so good. Finally, I was ready to warm it in the microwave.

I couldn't get it open. After a couple of fruitless attempts, I pulled really hard on the clear plastic lid and managed to get it off, sliding the plastic plate of meatloaf off the counter in the process. It landed upside down on the floor. There went my dinner.

Butch and Kadi were both tap dancing excitedly nearby, but the meatloaf was full of onions, so I couldn't let them have it. They did get to lick up a bite or two of potatoes and a few good slurps of gravy before I could clean it all up.

I ended up eating hot dogs, their only appeal being speed of preparation. That was a couple of hours ago. Now I'm thinking about having the bread pudding that I bought at the same deli. But it's in the same kind of dish.

Maybe if I spread a sheet on the kitchen floor first...
Posted by Linda@VS at 8:37 PM 2 comments: